San Diego-based Green Flash Brewing Co. has opened its first full-scale restaurant in Lincoln, Nebraska, next to the University of Nebraska campus. 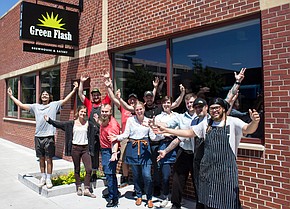 The Green Flash Brewhouse & Eatery will serve Green Flash and Alpine beer, as well as a full menu that will include vegetarian options. The restaurant currently has 25 employees.