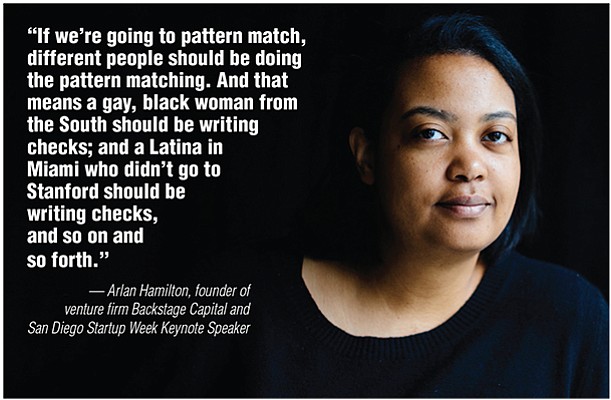 What: A weeklong series of events focused on entrepreneurship, including workshops, seminars and networking events

Who: About 5,000 entrepreneurs and others involved with the startup ecosystem are expected to attend

San Diego — The keynote address at the sixth annual San Diego Startup Week will be by Arlan Hamilton, founder of venture firm Backstage Capital. She will talk in a fireside-chat style event with San Diego entrepreneur Liane Thompson the evening of June 26 at Civic Center Plaza. Hamilton spoke recently with the San Diego Business Journal via phone from New York City about her ties to San Diego, an aspect of the local startup ecosystem she believes could put it on the map and what it means to be the first woman and first person of color to headline San Diego’s flagship event for entrepreneurs. This Q&A was edited for clarity and brevity.

Q: Backstage Capital is known for investing in underrepresented founders. Tell us a bit more about your investing thesis and what inspired it.

A: A few years ago, I saw — not having had any experience in the venture world, but having started different small companies and being really curious about the startup world — this anecdotal difference in how founders were being treated depending on their profile. Around that same time, statistics started coming out about how (more than 90 percent) of venture capital was going to white men, and I realized it was because that’s who was writing checks. There wasn’t a lot of diversity in the ranks of venture capital check writers.

Founders of color, women and LGBT founders were being overlooked, underestimated and underserved when it came to growth capital and capital for innovation. I realized that if there was someone who became the go-to for that group of people…it would seem to be a way of having an edge in venture capital. Great venture capitalists have great deal flow and an edge, something that differentiates them. That’s what got me started, and that’s been our focus ever since.

Q: Venture capitalists often talk about “pattern matching,” or the search for early-stage founders and companies with characteristics similar to those that succeeded in the past. What’s your take on the strategy?

A: It’s not necessarily a bad thing, but it’s like any power: It can be used in the wrong way. It’s looking at what’s worked in the past, as an investor, and trying to find that again, trying to re-create that. I think of pattern matching, though, as chasing the dragon: looking for that original high you’re never going to get again. There’s never going to be another Facebook, there’s never going to be another Google and there’s not going to be another Uber — but people are spending their entire livelihood and all their funding trying to find those companies again. They’re looking for the same types of people who started those companies — the (Mark) Zuckerbergs and the Travises…young white guys with large egos — really smart guys, but not necessarily smarter than the black woman sitting next to them. I’m looking for the black woman sitting next to them, in that same class, who probably had more obstacles than that guy did along the way. ... If we’re going to pattern match, different people should be doing the pattern matching. And that means a gay, black woman from the South should be writing checks; and a Latina in Miami who didn’t go to Stanford should be writing checks, and so on and so forth.

Q: What role does geography play in venture investing?

A: Two-thirds of the companies in our portfolio of 100 are outside of California, and we did that very intentionally. We didn’t want all of our companies to be Silicon Valley or the San Francisco area, because that’s not where all the talent and creativity and intelligence is: It’s all across the country. We could spend the next 20 to 30 years at Backstage in any of the emerging cities and have a wonderful ecosystem to play in.

Our home base is Los Angeles, where I live. My investment partner Christie (Pitts) lives in the Bay Area. … I love that we’re in L.A. It’s doing so well in venture; it’s one of the fastest-growing venture cities in the country, and (tech industry veteran and FounderForward CEO) Robyn Ward just called it out at a Rise of the Rest meeting in (Washington) D.C. earlier this year that (AOL co-founder) Steve Case put on: They asked her on stage, “why is L.A. winning?” And she said, plainly: “Diversity.”

Q: Backstage Capital has invested in at least one San Diego startup: Liane Thompson’s Aquaai, which deploys biomimetic platforms to gather marine data. You also have San Diego resident Lolita Taub on your team as an investment principal. Do you or Backstage have any other ties to San Diego?

A: We’ve also invested in (San Diego-based) Novoron Bioscience, a healthtech company that is working on a protein that could one day cure (multiple sclerosis) and other degenerative diseases. Our team is distributed in five cities, and one of those is San Diego. Lolita is our latest hire. We courted her for several months … but from day one, she always said no matter what happens, she wanted to be part of Backstage in some way, and I’m just so grateful she’s with us full time.

I used to live in San Diego when I first came to California, so I have an affinity for it. Even though I’m a venture capitalist, I think angel investors will fuel innovation in tech for the next 10 years, and San Diego has an amazing angel network. We just had several (San Diego) angels come up to Los Angeles for our investor day, and I knew about them because they’re proactive. There were a lot people who wanted to be in that room who weren’t because they didn’t have the connections the angels in San Diego have been forging with us. I think if San Diego were to put itself on the map as an angel city, that would attract more venture capital. Every time I go there, I tell my team: “Make sure I leave.” I look out the window — I like to stay by the marina — and think to myself: I wonder what it would cost to relocate everyone here. I honestly think about that sometimes [laughing].

A: I felt in March of this year, for the first time, that things were really shifting. We’ve been talking about it, we’ve been predicting it, we’ve even been hoping … In March at (the) South by Southwest (conference), there were thousands upon thousands of people representing the tech industry and the venture industry in one place, and I saw how diverse the people were at my talks. I may be the one that’s speaking, but I think it represents this sea change, and I think it’s for the better, because diversity, to me, means all of us, and that’s really exciting to me. I’m honored.