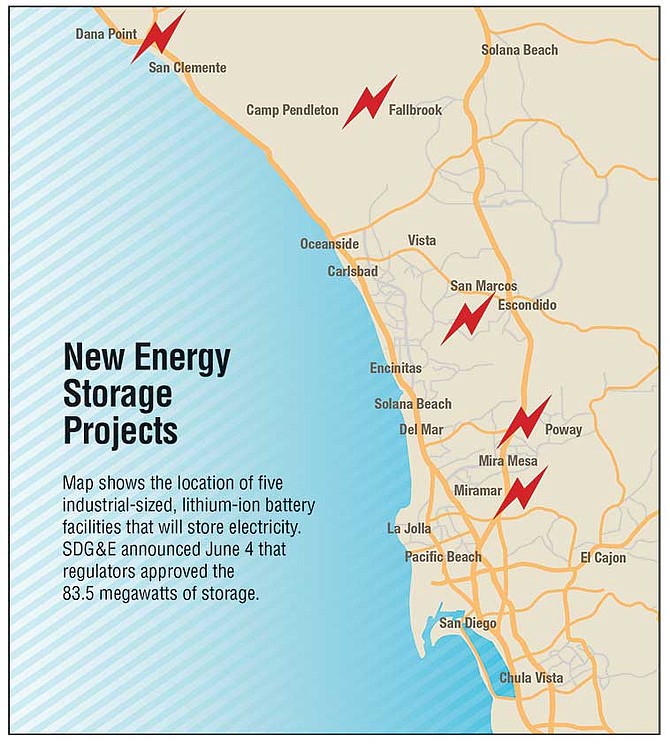 The effort promises to nearly double the amount of electricity storage available in the region by December 2021.

Some 83.5 megawatts of industrial-sized, lithium-ion battery facilities will offer the utility a way to store excess renewable energy for use later, during hours of peak consumption.

The California Public Utilities Commission OK’d the projects and SDG&E announced that approval during ceremonies June 4 at the site of one future facility off Miramar Road.

“I look forward to seeing this project come online next year and continue our collective journey toward a cleaner and greener San Diego,” said San Diego Mayor Kevin Faulconer, who attended the ceremony.

The project from Renewable Energy Systems America is a 30 megawatt/120 megawatt hour facility. Once complete in December 2019, it will be able to provide enough electric power to supply 20,000 houses for four hours, a utility spokesman said.

Renewable Energy Systems is based in the United Kingdom.

A project with even more capacity will go up in Fallbrook. Fluence plans to complete a 40 megawatt/160 megawatt hour lithium-ion battery storage facility by March 2021. Fluence is a joint venture of Siemens and AES, based in Arlington, Virginia.

• Advanced Microgrid Solutions of San Francisco, which will build a 4 megawatt/16 megawatt hour storage facility in San Juan Capistrano. SDG&E’s service territory extends into southern Orange County. The project is expected to be completed by December 2019.

• Powin Energy of Portland, Oregon, which will build a 6.5 megawatt/26 megawatt hour storage facility in Escondido. The project is expected to be completed by June 2021.

• Enel Green Power of Italy, which will build a 3 megawatt/12 megawatt hour storage facility in Poway. The project is expected to be completed by December 2021.

Also at the June 4 event, Sempra announced a deal with OhmConnect Inc., which will run a demand response program equaling 4.5 megawatts.

Separately on May 31, the Public Utilities Commission announced some $738 million of transportation electrification projects, including initiatives to support electric cars.

The commission authorized SDG&E to provide up to $137 million in rebates to people installing car chargers in their homes.

According to a commission press release, the sum could cover some 60,000 Level 2 charging stations.

More details of the effort were unavailable. As this issue went to press, SDG&E was still preparing its response to the commission, a spokeswoman