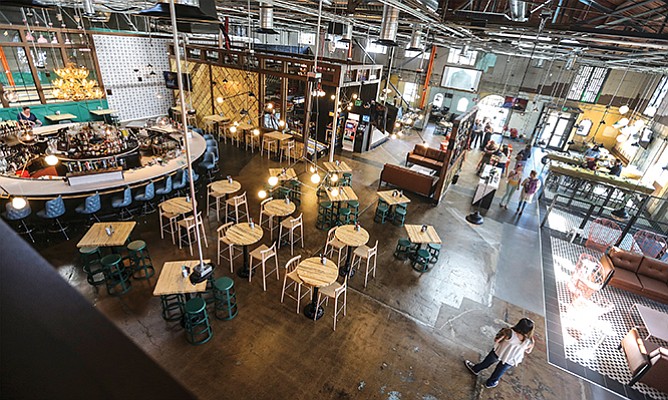 The interior of the Punch Bowl Social was kept wide open, much like it was when the arena was a boxing venue. The circular bar is one of three in the restaurant. Photo by Jamie Scott Lytle.

In its heyday, the Coliseum Athletic Club in downtown San Diego’s East Village at 1485 E St., was one of the city’s big attractions.

Then boxing got glitzy, and gritty venues like the Athletic Club lost their appeal. 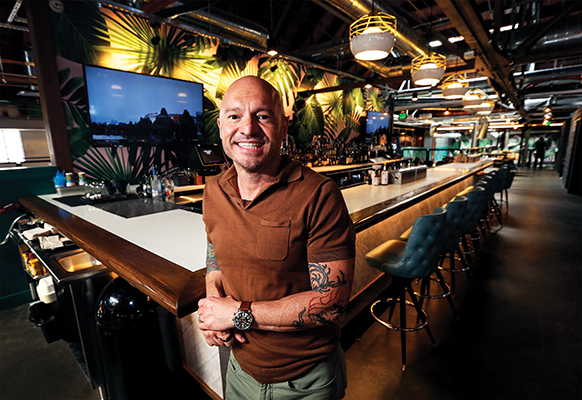 The Athletic Club closed its doors as a fight site in the early 1970s to become a furniture storehouse for many years.

Starting this month, a new heyday may be dawning for the old-time-arena, resurrected as Punch Bowl Social — a trendy restaurant that mixes dining with socializing and plenty of games, from bowling, bocce and darts to vintage video games, foosball and Ping-Pong.

Lankford & Associates, and HP Investors, both of San Diego, recognized the historical significance of the old arena and sought a tenant who would be a good fit, settling on Punch Bowl Social after seeing what the company had done elsewhere.

“We were very enthusiastic and impressed with the way they do their stuff in various cities, including Denver and Austin,” said Robert Lankford, CEO and owner of Lankford & Associates.

Together with Hensel Phelps, Lankford & Associates and HP Investors are redeveloping a six block portion of East Village which they’ve dubbed Makers Quarter. 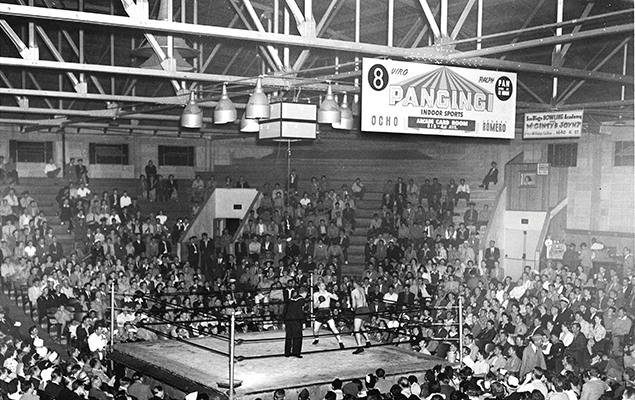 Right, the Coliseum Athletic Club was a big attraction during its heyday, drawing big-name boxers of their time. Historic photo courtesy of Punch Bowl Social

And, the new restaurant fits in with the developers’ vision to enliven the area with a mix of housing, work spaces and dining places.

Punch Bowl Social has a 25-year lease on the arena.

The Punch Bowl name for the restaurant is coincidental to the arena’s boxing history — stemming from CEO Robert Thompson’s interest in patterning his restaurants after social gatherings of the late 19th and early 20th centuries, although Thompson acknowledged that there’s a certain irony to the new restaurant’s history.

“Punch bowl social was an activity or an event to go to in the 1880s. That’s really the inspiration,” Thompson said. “I felt that we, as a society, needed more places to gather socially. There’s social media, then there’s real social interaction, and we sort of like the latter.”

The first Punch Bowl Social opened in 2012 in Denver’s historic Baker Neighborhood. The Denver-based company has grown to include restaurants in 14 locations, with more planned.

Buildings such as the Athletic Club have a special appeal to Thompson.

“We see the value in unusual structures,” Thompson said. “We’re not interested in growing our business in a bunch of malls. That’s not our philosophy. Other people do it, and they do it well.”

Touches of the arena’s history are scattered throughout San Diego Punch Bowl Social, from the collection of ringside bells that hang behind a counter at the entrance to the mats that were the floor of the boxing ring.

The mats have been used to make up the ceiling of an alcove used for darts.

Ticket windows on the outside wall facing E Street were left in place.

Even burnt lumber from a 1938 fire that threatened to destroy the arena have been put to use, forming the rear wall of a mezzanine section used for bocce ball.

“It gets us kind of excited to repurpose some of these remnants from a building that has such a great history,” Thompson said. 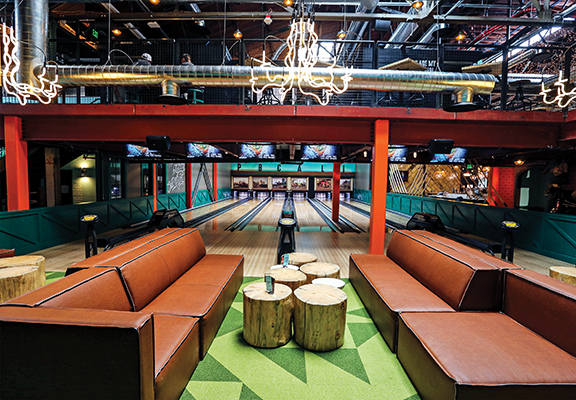 Top photo shows bowling lanes that are but one of the many entertainment options in the renovated arena building.

As a further nod to the arena’s history, Thompson staged a one-night round of boxing in 2016 before the renovation began.

Built in 1924 when California first legalized boxing, the renovated building with 23,500 square feet of space is cavernous — a look which Thompson has capitalized on, leaving most of the building wide open with room for up to 1,050 people at once.

When he took it over, the building had a mish-mash of mezzanine structures which had been used for storage, and piles of debris.

Thompson gutted the building, built a new mezzanine along the south wall and installed an open kitchen where diners can watch their meals being prepared, and three bars, including a large circular bar near the entrance meant to encourage people to interact. He said the renovation of the arena cost more than $6 million, but he declined to give a more precise figure.

Thompson explained the look of his restaurants as a mix of Victorian, industrial, mid-century modern and mountain lodge.

“We like to say it’s like a platypus – it’s awkward but it has a place in nature,” Thompson said.

Acheson described the mix as “Mex-Tex,” a takeoff on Tex-Mex, leaning more to Mexican than Texas cuisine.

The idea is to have something for every palate to produce “kind of a veto proof” menu, Acheson said, adding that, “In an environment such as this, we’re out to just make people happy.”

Thompson said he wants his restaurants to be family friendly.

With that in mind, beverage director Patrick Williams said there’s an ample selection of non-alcoholic beverages such as jalapeno cucumber limeade, coco Fresca and a variety of milk shakes.

“We like to have fun with it,” Williams said.

For those who want something stronger, there’s traditional bar fare along with punch spiked with tequila, gin or rum served in a glass for one person or bowls for groups of four or eight.

Neighbors were excited about Punch Bowl even before it opened June 9.

“It’s so cool that they didn’t tear it down and build something hideous,” said MaeLin Levine, founder and president of the Urban Discovery Academy around the corner at 840 14th St., and partner and creative director of Visual Asylum design studio at 1045 14th St.

“Parents are really excited to have a family friendly sort of meeting place within proximity to the school,” Levine said. “It really starts to feel like there’s a hub, a there, there.”

Maybe not hideous, but the old arena did have a brush with a far different transformation.

An early proposal would have kept the shell, and built a residential tower in the middle of it, said Stacey Lankford Pennington, principal of SLP Urban Planning Group and an advisor on the arena renovation.

“There was a lot of development pressure to densify the block,” Pennington said.