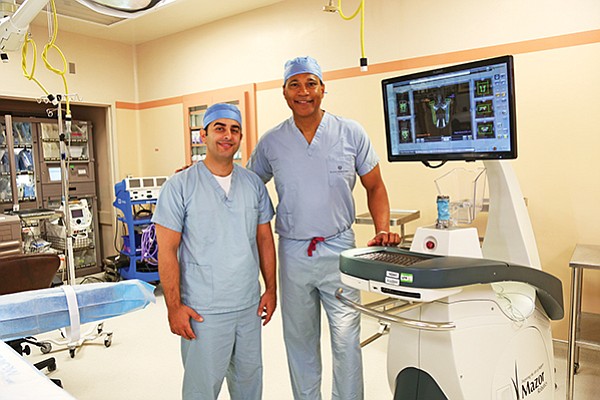 Palomar Health’s website brags about performing robotic surgery since 2007, longer than “any other medical facility in the community.” 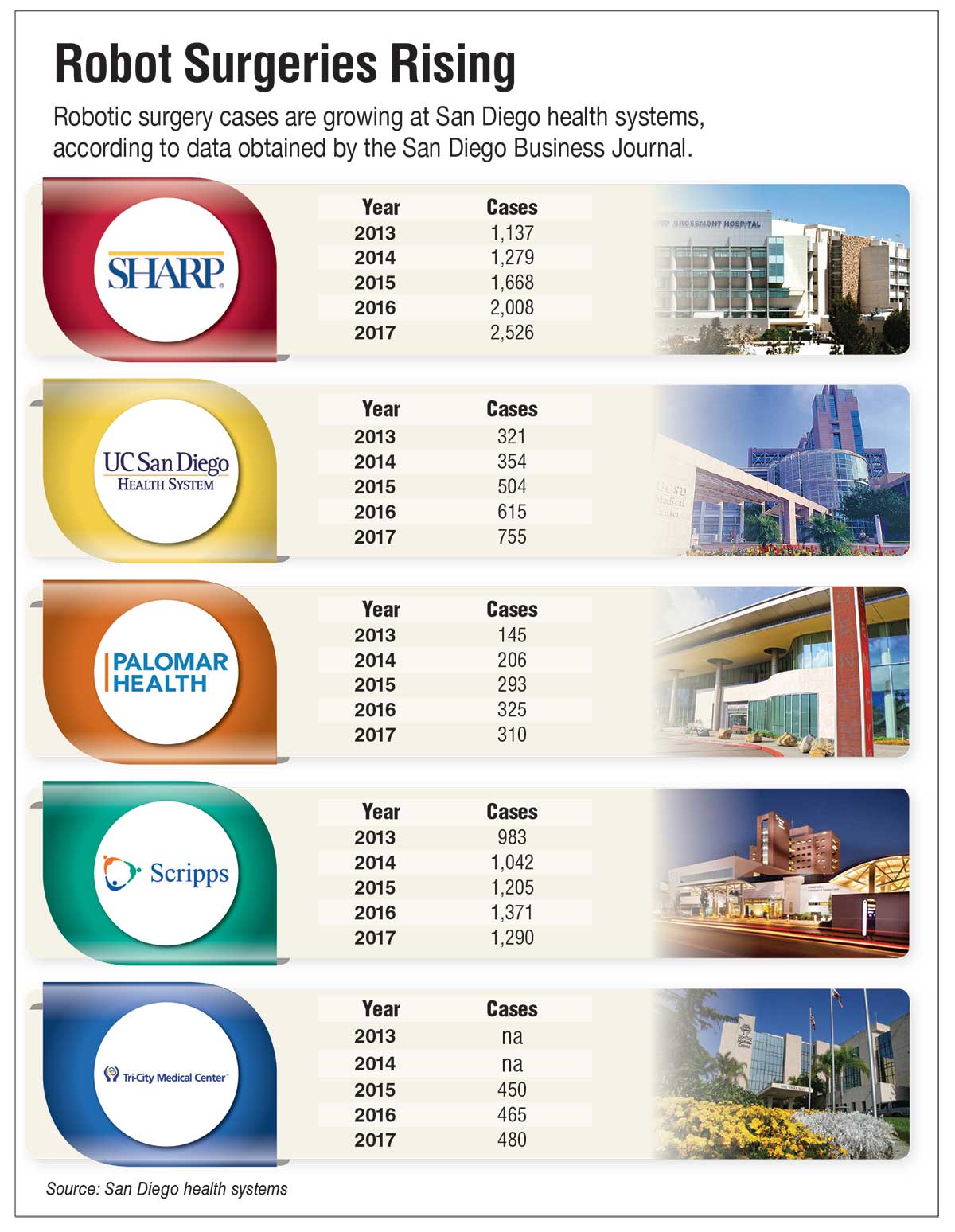 In San Diego hospitals, robots are on the rise, judging by splashy marketing and an increase in robotic surgery cases, per data obtained by the San Diego Business Journal. Hospital officials point to clamoring among patients and surgeons for the approach, crowded with regional competition.

They also say the technology makes clinical and fiscal sense — that is, for the right surgeries. This follows national studies questioning high costs and whether robots deliver better results for certain procedures.

Robotic surgery, something of a misnomer, typically entails a surgeon looking through a viewer at patient anatomy, while remotely controlling robotic arms attached to surgical instruments. Surgeons liken it to a video game, in that the technology precisely mimics hand and foot controls.

This method builds on minimally invasive laparoscopic surgery, for which a small camera and instruments enter through minor incisions, replacing open surgeries.

“So what I think it’s migrated to now that we’re 15 years into the maturity of robotic surgery is surgeons have come to understand where it really seems to provide value,” Kane said.

As one example, he said the dexterity of a robot makes it best for partial nephrectomy, a tough procedure involving the removal of a kidney tumor while leaving the rest of the organ intact.

But da Vinci robots can run as much as $2 million, along with an annual service contract. Kane said the costly capital investment is worth it.

“The argument that makes that reasonable is if it decreases the length of stay or decreases the transfusion rate and gets people back to work quicker,” he said.

Whether robots pencil out economically largely depends on volume, according to James Bush, a principal with Deloitte Consulting’s health care and life sciences consulting practice.

“If you’re going to spend a million or two million on a robot, how many procedures are you going to perform to see the return on the investment?” said Bush.

“It’s almost like a production line in a factory. The more consistency you have, the better you become at that procedure,” Bush said.

While hospitals want to be seen as on the cutting edge, he noted two long-term analyses suggest robots don’t boost outcomes in some instances.

On the other hand, the technology clearly benefits other surgeries, stated one of the studies, conducted by Stanford University School of Medicine.

The Stanford research also indicated robot surgeries are improving in cost and efficacy as time passes, especially since the 12-year study dates back to 2003, when physicians were still new to the technology.

Others echo this sentiment.

“In the beginning, we didn’t know about the learning curve and how long it would take a surgeon to be that good at it,” said Dr. Carol Salem, medical director of Scripps’ minimally invasive robotic surgery program.

“Even if the overall outcome would have been the same with my hands, the benefits are getting better quicker,” Salem said.

While embracing the technology, Salem said Scripps is holding surgeons accountable in controlling robotic surgery costs, a first-of-its-kind push. That could mean, for instance, being more mindful of which instruments are necessary.

“It’s not telling the surgeon, ‘No you can’t use it (a robot),’” said Salem. “But it’s certainty making us more accountable for our use of it.”

Many surgeons see robotic equipment, which affords a three-dimensional, magnified view, as indispensable for tricky procedures, according to Dr. Omar Khawaja, chief medical officer and an anesthesiologist with Palomar Health.

Doctors there carried out 310 robotic surgeries last year, more than double 2013’s total. Most of the growth came in urology cases, an area Khawaja said has proven clinical benefit like less blood loss and sparing the nerves near removed tissues.

Palomar looks to grow its robotic footprint in specialized oncology, also supported by fairly strong clinical data, according to Khawaja.

Public preference, he said, puts hospitals without the technology at a competitive disadvantage.

“If you’re seen as someone who is just going to send out the difficult cases, or there’s certain sub-segments of your population that you’re not going to be able to serve, I think that’s just a large detrimental effect,” Khawaja said.

Sharp Coronado Hospital, part of Sharp Healthcare, was able to lure a surgeon’s group with a new da Vinci robot, which launched last July. That group complained of not getting enough robot time at prior facilities.

The Coronado Hospital Foundation funded the da Vinci system, but in the future Sharp hospitals will likely pay for such purchases due to the technology becoming standard in care. That’s according to Susan Stone, CEO at Sharp Coronado.

“The island residents in Coronado are used to five star, top-of-the-line service in everything that they experience in life,” Stone said.

Among regional health systems, Sharp Health reported the highest number of robot-assisted surgeries, with 2,526 cases in 2017, 122 percent higher than 2013.

In a statement, Dr. Neville Alleyne of Tri-City highlighted the approach’s benefits in spine surgery.

“Not only is robotic assisted surgery more accurate for the placement of screws in the spine, but it decreases the amount of time in the operating room and the time that patients are under anesthesia, reduces blood loss and decreases the infection rate. This allows patients to leave the hospital sooner,” Alleyne said.