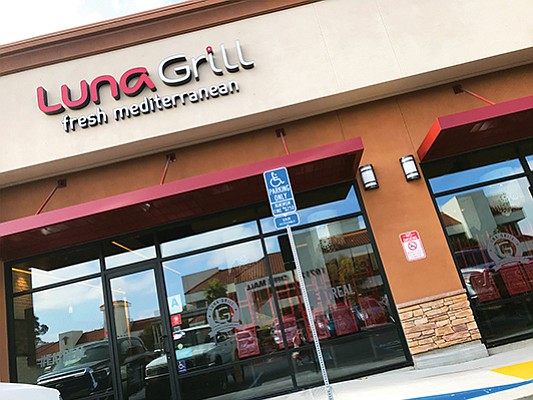 The Luna Grill restaurant in Mira Mesa is one of the 15 locations in San Diego. Photo by Mariel Concepcion

San Diego — For Maria Pourteymour, co-founder and chief cuisine officer of San Diego-based Luna Grill Restaurants LLC, the love for good, simple yet high-quality food has been a tradition passed down through her family, from generation to generation.

No. of Employees: Nearly 1,200 (50 are in corporate headquarters at Carmel Mountain Ranch)

“My grandparents had a restaurant in their village in Greece and my parents had their own food business when I was growing up,” said the native San Diegan, who is a self-taught chef. “I’d be in my grandmother’s business helping her cook or at my parent’s restaurant through my formative years. The way my grandmother and my mother cooked and baked, they held such high standards. If the dessert wasn’t excellent, it just wasn’t served. That’s how I was raised, and that high standard translates into my work and into my life.”

So, in 2004, after moving to a new neighborhood in San Diego and noticing there weren’t many healthy food options there, 43-year-old Pourteymour and husband Sean Pourteymour, chief executive officer of Luna Grill, who were running a successful car repair shop at the time, opted to sell their business and open their own restaurant.

Today, Luna Grill has 45 locations — all corporate owned — in Southern California, Inland Empire and the Dallas-Fort Worth area. Maria Pourteymour, who has two daughters, says the plan is to add 10 to 15 new locations in the next year, potentially in new markets, and continue to add the same number of restaurants every year moving forward. Additionally, new items will be added to the menu, with plates at around $12, and all Luna Grills will get a facelift with new décor to match the revamped food lists in coming weeks.

While Luna Grill is a privately held company and does not disclose sales, its target growth rate is 25 percent to 30 percent per year. Luna Grill now employs about 1,200 companywide, including 50 housed at its headquarters in Carmel Mountain Ranch. A 2016 San Diego Business Journal article said Luna Grill posted sales of nearly $27 million in 2015, more than doubling its revenue from just two years prior. According to restaurantbusinessonline.com, Luna Grill had $36 million in sales in 2016. And, as per Fast Casual 2017 Top 100 Movers & Shakers list, on which the eatery landed at No. 5, the brand reported a 19 percent increase in sales for that year. The list is sponsored by Oracle Hospitality and recognizes innovative restaurant brands and executives shaping the fast casual segment. Although, Luna positions the restaurants as a “luxe-casual” option, differentiating from the booming fast-casual model with meals made to order and served to the table, and an absence of disposable tableware or flatware.

Pourteymour believes her restaurants are thriving because they serve uncomplicated, basic food like grilled chicken, rice and salad that is healthy and tasty and can be enjoyed by the whole family. In 2015, Luna Grill became REAL Certified, becoming the first non-full-service restaurant to do so in Southern California. The United States Healthful Food Council (USHFC) developed REAL Certified to be the “trusted, nationally-recognized mark of excellence for food and food service operators committed to holistic nutrition and environmental stewardship.” REAL stands for Responsible, Epicurean, Agricultural, Leadership.

“Luna Grill is basically an extension of our home,” Pourteymour said. “It is kind of geared toward replacing people’s kitchens. With everyone being busy, it is hard to find time as working adults to do all the grocery shopping, go home, chop all the veggies, clean all the food and cook it. We wanted to make wholesome, better-for-you food that you could pick up several nights a week for you and your family and feel great about it.”

That’s why Pourteymour knew there couldn’t just be one Luna Grill, and, in 2008, decided to expand, opening two more restaurants then. “We had a lot of demand, with people asking us to open in other parts of San Diego,” she said. “And, although people were nervous about the economy taking a downward turn around that time, I knew we would be fine because, although people weren’t going to be going to super expensive restaurants, they would still eat out and they still wanted good value. For us, it was a great time.”

Just last year, Luna moved into a bigger, 10,500-square-foot headquarters office space in Carmel Mountain Ranch to accommodate the growing corporate staff, after outgrowing its former office at University Towne Center. In the last month, the company has hired five to six more people with the expectation of adding more, and, maybe, moving to yet another bigger space in the near future.

Recently, to help with the growth of Luna in existing and new markets, the Pourteymours partnered with private equity group Perella Weinberg, from which it received an equity investment of an undisclosed amount. Perella Weinberg is now a shareholder in the restaurant. In 2016, Luna secured nearly $30 million in financing from CapitalSpring, a private investment firm focused on the branded restaurant sector, to aid its ongoing growth strategy.

Pourteymour says there are no plans for an initial public offering, although she isn’t completely against it in the future if it makes sense for the company. And, while all Luna Grill operations are company-owned and not franchised, Pourteymour says she could consider franchising down the road.