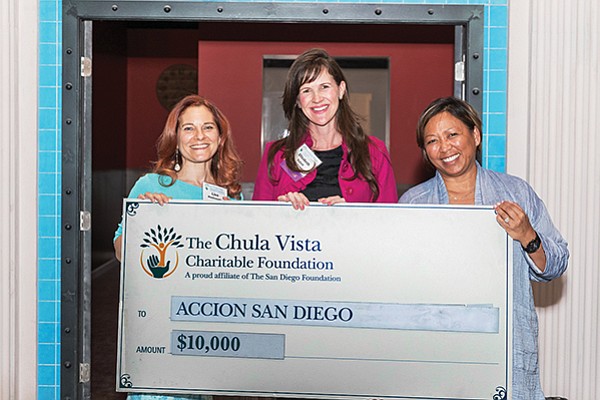 San Diego — Chula Vista Charitable Foundation, an affiliate of The San Diego Foundation, announced that. at the 9th Annual CVCF Grants Celebration, $55,000 in grants are going to benefit Chula Vista residents of all ages and backgrounds for job training and workforce development resources. The grants were announced at the Reminiscence Therapy facility in the Glenner Town Square.

By investing in programs that facilitate job growth and development in Chula Vista, CVCF is creating a direct link between charitable giving and the future of the region.

Debbie Espe, CVCF Board chair said: “...By investing in the people that make up our workforce today, and into the future, we are strengthening that commitment to the community.”

Since its inception, members have granted more than $300,000 to nonprofit organizations in the community. In addition, earlier in 2018, CVCF and its members celebrated a milestone as it surpassed $500,000 in its permanent endowment fund to support programs in Chula Vista in perpetuity. Visit sdfoundation.org.

Mama’s Kitchen announced that it raised $170,000 at its 27th Annual Mama’s Day held recently at the Hyatt Regency La Jolla at Aventine. The funds raised by 600 attendees to support Mama’s Kitchen will allow the organization to continue to fulfill its mission by providing more than 58,000 meals free of charge to local women, men and children vulnerable to hunger due to HIV, cancer or other critical illnesses.

Alberto Cortés, executive director of Mama’s Kitchen said: “With these funds, we will be honored to touch more lives and provide nutritious meals to thousands of San Diegans in need.” Visit mamaskitchen.org.

The Scripps Research Institute announced that Gilead Sciences’ Chairman of the Board of Directors, John C. Martin, has joined its board of directors. Widely respected for his scientific and business leadership, Martin was named best CEO in 2015 by the investment research company Morningstar Inc. As CEO of Gilead, a position he held for 20 years, Martin led the development of HIV and hepatitis therapeutics, overseeing the expansion of the company’s drug portfolio to 24 marketed products. Through the Gilead Access Program, he oversaw the distribution of medicines for HIV/AIDS, viral hepatitis and visceral leishmaniasis, a parasitic disease, to developing countries. Visit scripps.edu.

The Children’s Nature Retreat Foundation announced that at its annual fundraiser “Disco Ball 2018,” it raised $91,091 to help its animal sanctuary. The Retreat is home to 120-plus animals and it provided 1,471 subsidized field trips for underprivileged children in San Diego County. The funds will also help support its pre-school, nursery and scholarship program in Burkina Faso, West Africa. Visit childrensnatureretreat.org.

Walden Family Services, a Southern California-based nonprofit foster care, adoption and transition-age youth housing agency, announced that it is among the first agencies licensed by California to implement Intensive Services Foster Care (ISFC) throughout Southern California. ISFC is a program model that allows foster children with complex medical, therapeutic or behavioral needs to remain in a home-based setting for care.

Walden has worked with medically fragile children since 2001, placing high-need children in foster and adoptive homes as an alternative to institutional or hospital settings. Such placements allow children and youth to experience the normal familial bonds and one-on-one care that only a parent can give. Visit www.waldenfamily.org.