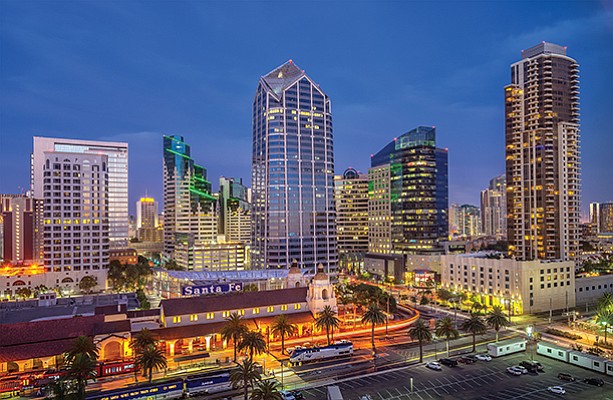 The Santa Fe train depot is a key element of the Columbia District. “We want each neighborhood to be vibrant, but in its own way,” said Betsy Brennan, Downtown San Diego Partnership CEO. Photo by Scott Murphy

San Diego — Ask someone where San Diego’s Gaslamp Quarter is and what’s in it, they’ll likely know.

So too for Little Italy, and to a lesser extent, East Village. 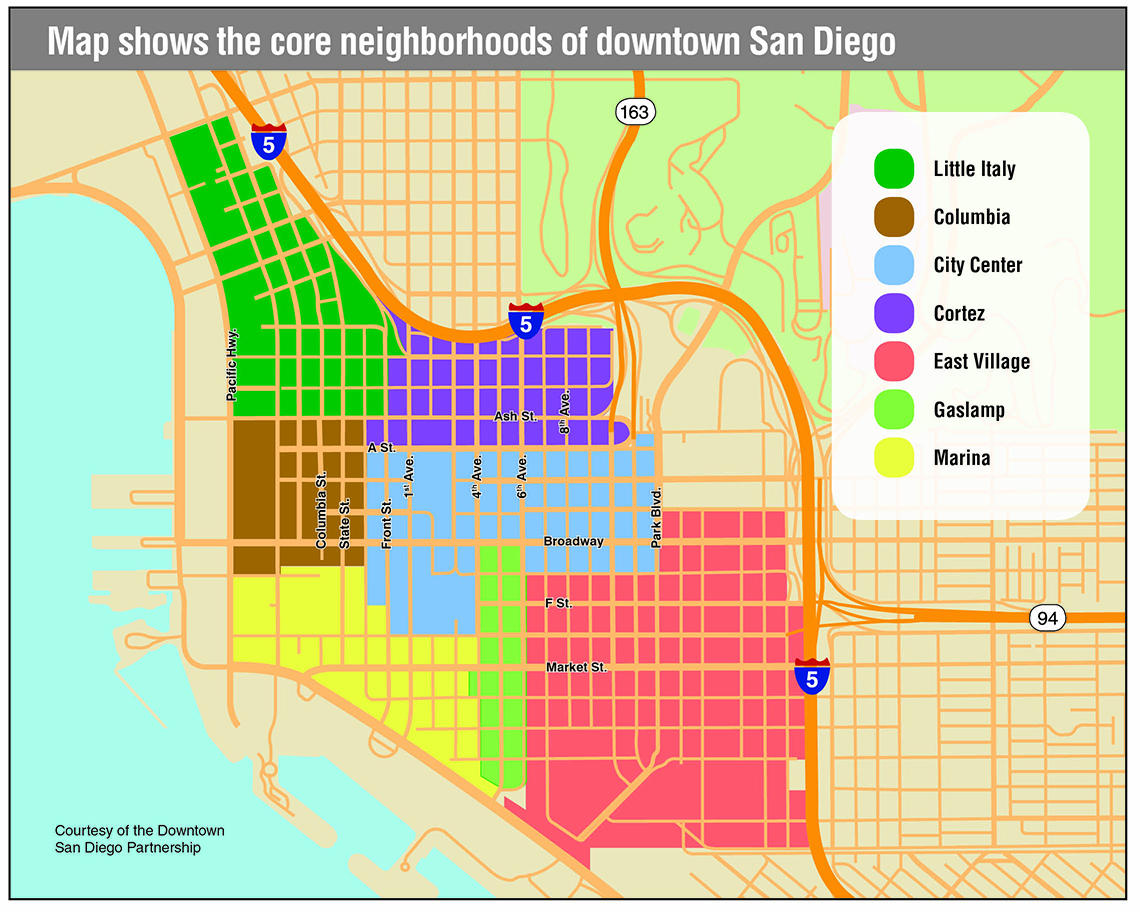 The Columbia District? Not so much.

“I don’t think it has an identity,” said Christine Takara, director of marketing and customer experience for Emmes Group of Cos.. “People don’t necessarily know what it’s called. There isn’t significant branding. People just go to work and live here.”

Emmes, which owns five buildings downtown including 1 Columbia Place at 401 East A St., and 2 Columbia Place at 1230 Columbia St., has joined with other neighborhood property owners, retailers and residents to form the Columbia District Foundation with a goal of energizing the neighborhood and making it a place that stands out.

Columbia is the downtown San Diego neighborhood south of Little Italy, bounded roughly by Pacific Highway to the west, Ash Street to the north, E Street to the south and Union Street to the east.

For many years, Columbia was mostly a collection of vacant spaces, often used as street-level parking lots – a place that people walked through but really didn’t think about.

“The neighborhood just didn’t seem to have a lot of character,” said Eric Jones, foundation president and president of Urban Real Estate Services.

It’s most distinguished feature was the Santa Fe Depot at 1050 Kettner Blvd.

That’s changing, with construction of such projects as Bosa Development’s Pacific Gate and Savina luxury condominium towers, the Carte and Intercontinental hotels, and the $1.5 billion Manchester Pacific Gateway along the waterfront.

According to the U.S. Census Bureau, 1,674 people live in the Columbia District with a median age of just under 50, compared with a countywide average of about 44.

In forming the Columbia District Foundation, Takara said Emmes and others looked for their inspiration to the north at what’s been happening in Little Italy, where the neighborhood is booming with an active nightlife, a plethora of retail shops and restaurants, and a reputation as the new hot spot in downtown San Diego, rivaling and the Gaslamp Quarter.

Once San Diego’s red light district known as the Stingaree, the Gaslamp Quarter shed its less savory reputation in the 1980s and 1990s as property was redeveloped, buildings renovated and trendy up-scale restaurants, nightclubs and hotels moved in.

Little Italy underwent a similar transformation that started in the 1990s following the decline of the West Coast tuna industry and continues with construction of new residential and office projects and an ever-growing dining and retail scene.

Takara said Little Italy is “kind of the impetus” of what the foundation would like to do in the Columbia District.

“We kind of looked at Little Italy and said, ‘Wow, what a great place they have. It feels like a wonderful neighborhood that we all enjoy. How could we do something like that in Columbia,” Takara said. “We don’t want to be Little Italy, but what is Columbia?”

Figuring that out is a primary task of the Columbia District Foundation, Jones said.

“I’ve lived in Columbia District since 2003 in a high-rise building down there. I just love the area. The area’s got so much potential,” Jones said.

Some of that potential is already being realized, with several high-profile projects under construction or planned and as some older buildings have been renovated or have renovations in the works, including $18 million Emmes spent redoing 1 Columbia Place since acquiring the building in 2012.

“We would love to see more companies come into the downtown market, so we want to give them a vibrant place to work and play and live,” Takara said. “We’re creating more of that, not making it a place that people just come 8 to 5 and just leave.”

That’s changing, and the Columbia Foundation in striving to get the word out and create a strong identity for the neighborhood is working with the Downtown San Diego Partnership — a nonprofit organization that promotes downtown.

“We want each neighborhood to be vibrant, but in its own way,” said Betsy Brennan, Downtown San Diego Partnership CEO.

“It’s a wonderful opportunity to create energy and an identity for the Columbia District,” Brennan said. “The stronger each district can be and the more vibrant, the better it is for the whole region of downtown. This was sort of a grassroots effort that a lot of the property owners were talking about, let’s really activate this space.”

Brennan said her group is working with the Columbia District to do what she called “pop-up action” such as quick, temporary restaurants and outdoor yoga classes that have worked elsewhere, “just to give them a sense of neighborhood.”

Jones said the neighborhood has a start in building an identity through the Music Box, a live music venue at 1337 India St.

Building on that, the foundation is planning outdoor street concerts on India Street between A and B streets with musicians performing on several stages with food and drink concessions, although nothing has been scheduled yet.

More definite plans call for a new mural celebrating the neighborhood to be painted later in June on the north side of 2 Columbia Place.

The foundation began its drive to give the neighborhood a new look by getting local artists to paint colorful mini-murals on 20 utility boxes throughout the district.

The district also plans to replace generic planters scattered throughout the district with some that are more distinctive and decorative.

Still to come are banners and improved sidewalk lighting to make the neighborhood more inviting for an evening stroll.

“I don’t think we’ll ever be as identifiable as Little Italy,” Jones said but, “We’re looking at different events that we can do in the Columbia District to kind of create a distinctive neighborhood.”