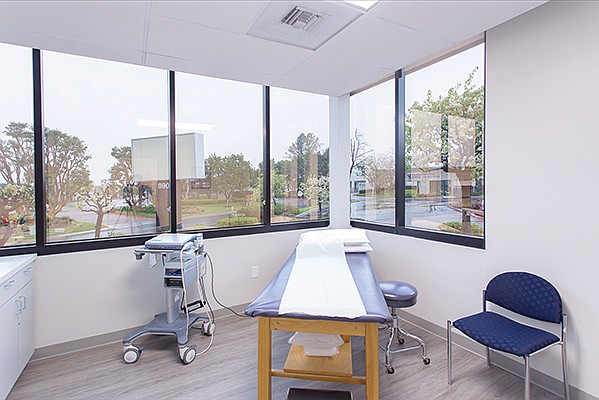 An exam room is one of the features WeShareMD offers doctors and other medical professionals. Photo courtesy of WeShareMD

San Diego — When a water pipe burst in their downtown San Diego medical office building, Pacific Medical Care had to find some place fast where they could see 40 to 50 patients a day. 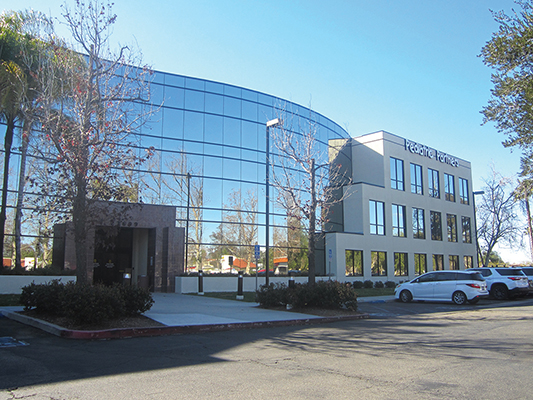 The Temecula building WeShareMD shares with other medical offices. Photo courtesy of WeShareMD

They also needed space for the drug rehabilitation program they run in the same building.

They found it in WeShareMD, a San Diego-based company that opened in June to provide office space and examination rooms as needed for doctors and other medical professionals modeled after WeWork, which provides shared general office.

“The facility was incredible. We couldn’t have asked for anything more,” said Mari Burrows, chief operating officer of Pacific Medical Care.

“They had clinic beds all set up and it was incredibly organized,” Burrows said. “There were copiers, fax machines, anything you could need, it was there.”

Pacific Medical learned of the burst pipes on a Saturday.

By Tuesday, they were up and running in WeShareMD’s San Diego operation at 8901 Activity Road – WeShareMD’s very first client.

Burrows said her company leased space from WeShareMD for two weeks until the pipes in their permanent offices were repaired.

Encinitas plastic surgeon James Chao and property investor George Scopetta came up with the idea for WeShareMD after meeting at a Padres baseball game three years ago.

The basic fee of $300 per four-hour block includes the use of a patient examining room that comes stocked with medical supplies such as gauze and tongue depressors, an office for consultations and the services of a receptionist.

The company has offices in San Diego and Temecula with plans to open additional offices later this year in Oceanside, Encinitas and a second San Diego office near Alvarado Hospital.

“You rent the space as you need it,” Chao said. “There is no TI (tenant improvements), there is no down payment. You can pay for exactly what you use and you’re gone.”

WeShareMD shares space in medical office buildings with other medical professional groups, such as radiologists and testing labs that have more conventional long-term leases.

In effect, it becomes a kind of one-stop shop, Chao said.

Doctors using WeShareMD can refer their patients for lab work or other tests to other offices in the same building and see the patients to review the results during the same day’s visit.

WeShareMD also offers what it calls a virtual office for an additional fee of $150 a month that allows doctors and others to use WeShareMD’s office as their legal address to receive mail and register for things such as medical malpractice insurance.

Seth Kaplowitz, a lecturer at the Fowler College School of Business at San Diego State University, said Chao and Scopetta have “a great idea” in WeShareMedMD.

Without the expense of long-term leases, doctors could even charge less, Kapowitz said.

“Especially for new doctors starting out, a big problem is the up-front investment that has to be made to set yourself up,” DeNoble said. “This is bringing a lean, startup mentality to the medical profession.”

For those who already have medical practices, “It enables a smaller practitioner to project a much bigger image. It makes expanding a geographic presence that much easier without the necessity for major investments,” DeNoble said. “What this does is it takes the WeWork model into medical, which has more unique, very specific kinds of needs. It provides equipment and facilities that are more germane to the medical industry where WeWork provides basic office space and amenities that would appeal to more of a generic rather than an industry specific (client).”