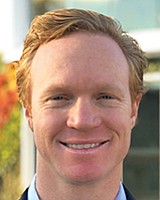 San Diego — Paul Komadina has been tapped to lead CBRE’s operations in Arizona. Komadina, who was born and raised in Phoenix, will be senior managing director.

Komadina has been with CBRE since graduating from the University of San Diego in 2005 and was named managing director in 2013, overseeing investor leasing of all product types, investment properties and debt and structured finance.

In addition to his work with the local NAIOP chapter, he has been a board member of LEAD San Diego since 2015 and a driving force for the past three Visionary Awards programs. Komadina also has participated in the Padres Pedal the Cause for the past five years.

Eight people from the SD 500 were among the founders and leaders honored last week at our 100 Fastest Growing Private Companies event at The Westin San Diego Gaslamp Quarter.

Ben Badiee and Badiee Development were the fifth fastest growing company. Others were:

George Palermo is expanding Flagship Cruises and Events’ Coronado footprint by developing two new restaurants at the ferry landing. Flagship Cruises and Events, which also operates the Coronado Ferry. The same ownership group has a new entity, Ferry Landing Associates, which has won approval from the Port of San Diego for a $6 million project that is expected to begin construction sometime in 2019. Palermo has not announced what types of restaurants will occupy the space.