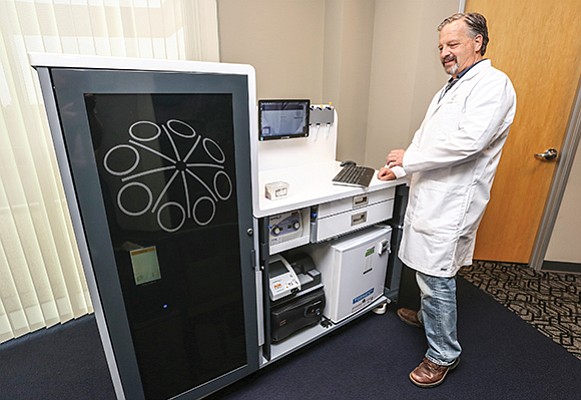 Rick Hockett, chief medical officer of Genalyte, demonstrates the company’s mobile blood testing technology. Genalyte is among the San Diego blood companies that have differentiated themselves in the wake of disgraced Theranos. Photo by Jamie Scott Lytle.

San Diego — Genalyte can run tests on drops of blood, often delivering results in only 15 minutes. The goal? Disrupt lab testing. This may sound familiar — and not in a good way.

Silicon Valley’s Theranos sought to revolutionize health care with finger-stick blood tests. But federal criminal charges filed last month against the company’s former No. 1 and No. 2 allege efforts to mislead investors with faulty tests. Amid this rise-and-fall story, San Diego blood testing companies like Genalyte are eager to show investors they’re no Theranos.

“You really have to step forward with proof that what you do works,” said Genalyte CEO Cary Gunn, noting he constantly answers the question, “How are you different than Theranos?”

Gunn said transparency is a company tenet. While Theranos was criticized early on for a dearth of hard evidence, Genalyte’s website contains white papers and published studies in peer-reviewed journals. The company invites media, investors and other groups to give the technology a spin, a contrast to Theranos’ secrecy.

Although lacking scientific rigor, Gunn said Theranos was right to try to decentralize lab testing. Genalyte’s Maverick Detection System aims to make blood tests a standard, 15-minute exercise at the doctor’s office, supplanting outside laboratories that can take days or even weeks to return results.

Gunn said this cuts down on presumptive treatment, in which patients are prescribed drugs that may be harmful or unnecessary while waiting for lab work. As a positive, Theranos got more in health care thinking about point-of-care diagnostics, a segment that encompasses tests skipping offsite labs.

Like investors, health providers upped the burden of proof. They want data and pilot projects. This comes after Theranos reportedly rolled out inaccurate blood tests at Walgreens stores in California and Arizona.

“For many years it was hard to get financing and attention because everyone believed Theranos had already solved the problem. In the wake of Theranos, everyone is skeptical about this claim. So we have to provide more data, we have to really engage people in how our technology works, what we do, and they have to see it,” said Gunn.

Of note, the company in January showcased the lab-on-a-chip technology at San Francisco’s JPMorgan Healthcare Conference, a top gathering of executives and investors, for a fundraising roadshow.

The Maverick is currently undergoing clinical trials as part of seeking U.S. Food and Drug Administration approval, and the company launched a nonproprietary version in Texas. Of 100 common lab tests, the company offers 15-minute results for two-thirds. FDA approval would bump that up to about 95 of the 100, according to Gunn.

“There are many investors who told me they can’t take anything that looks this close to Theranos to their partnership for an investment,” Gunn said. “Attracting new investors amidst all the chaos has been problematic.”

“If a point-of-care result in a hospital shows a lack of infection, it’s possible the patient could then be going home, which is a cost savings,” Carlson said, as an example.

In a crowded market, Carlson views Genalyte, still at a fairly early phase, as promising.

“I will say the company is on a much better track than Theranos,” he said, adding with a laugh: “It’s hard not to be.”

This saga hasn’t changed the view of Sai Sunkara. He’s with the local chapter of Tech Coast Angels and invested in another blood testing company in 2008.

“There is a massive opportunity here,” Sunkara said.

Some investors taken by Theranos’ tale a few years ago passed on San Diego-based True Diagnostics, which offers point-of-care testing that to a minor degree overlapped with Theranos. Shareholders raised questions too.

“There was just a lot of concern about missed opportunity and that they would grab all the market share,” said Jerry Lee, founder and CEO of True Diagnostics. These days he receives a good number of outside inquires about what makes the company different.

“It’s created more scrutiny, which is good for us,” he said. “There’s a lot of noise around diagnostics.”

To be taken seriously, products are expected to win FDA backing, something True Diagnostics holds.

“We have a wide talent pool of people that have decades of experience within in vitro diagnostics, assay development, medical devices,” he said. “This sets San Diego apart from different types of communities like Boston or San Francisco.”

Companies occupying other parts of the blood testing industry haven’t had to distance themselves from Theranos. Take Biocept, which specializes in blood samples identifying markers for the treatment of cancer, in instances when taking a piece of a patient’s tumor risks complication. In other words, very different from Theranos — and investors realize this.

Not to mention, Biocept is heavily regulated.

“We are regulated and prove that our tests work,” said Joseph Spidle, marketing director of Biocept, based in San Diego. “So we don’t have any trouble with the types of things Theranos has trouble with.”