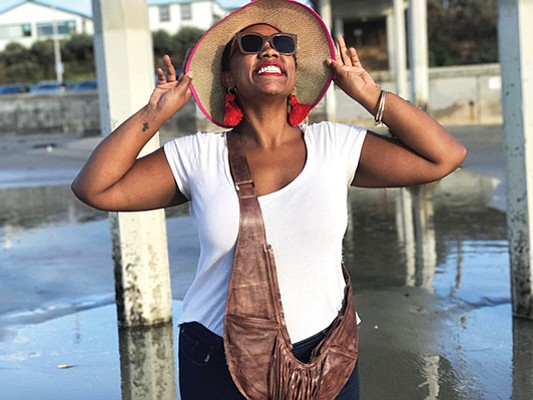 In photo above, a model displays a sash bag. Nichole MacDonald, founder of Sash Group Inc., has a private Facebook group of almost 5,000 women from around the world that refer to themselves as “Sash Sisters” and share photos and stories about their love for the sash bags and experiences. Photos courtesy of Nichole MacDonald

Company description: Produces bags with 10 compartments that distribute weight evenly between the front and the back of the wearer’s body. 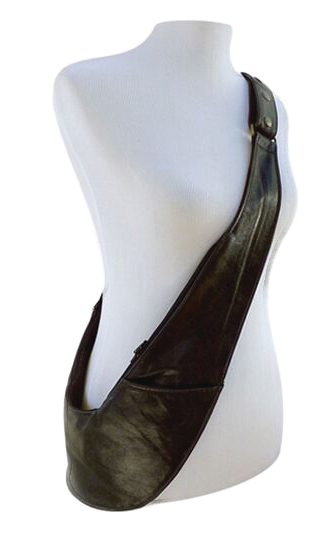 The black leather sash bag is the company’s best-seller. Now, in its sixth year, Sash Group Inc., which has ten employees and has a fulfillment center in Canada with manufacturing done in India, is expanding into two more factories in China and is projected to sell 70,000 bags and hit $7 million in sales this year.

San Diego — Eight years ago, Nichole MacDonald, founder and chief bag lady of San Diego-based Sash Group Inc., found herself homeless with her then 5-year-old son after her recycled, eco-friendly bag business, Bagonia, failed to get off the ground.

“I spent all of my money and other people’s money on Bagonia and it completely flopped,” says the 38-year-old mother of two, who launched the company in 2008 after leaving her job as a graphic coordinator for Aroma Housewares. “I believed in it so much that I kept going, and I wound up in a situation where I had my car repossessed in the middle of the night, a single mom, sleeping on the floor of a friend’s house. At that time, people were saving money and didn’t want to spend $250 on a bag. It just wasn’t the right time or the right market.”

Two years later, she got the idea for a new design: a bag that hugged the body — much like a pageant queen sash — and had enough compartments to hold the essentials, and distributed weight across the front and the back of the wearer’s torso. In the fall of 2012, after having a friend hand-sew a prototype, wearing it out and getting three inquiries on it the same night, she officially launched the sash bag. With the help of a Kickstarter campaign in spring 2016, which raised $81,000, and $300,000 in investment money from San Diego-based life coach, Liz Stone, the company went from $350,000 in revenue in 2015 to $1.2 million in 2016. Last year, Sash Group Inc., headquartered in Hillcrest, sold 30,000 bags and made $2.8 million in revenue.

Most recently, MacDonald credits the sash sisterhood, a group of sash bag fanatics from around the world, which she has connected with personally via a private Facebook page started in mid-2017, for helping take the business to the next level. In June, after receiving multiple requests for a larger version of the sash bag, MacDonald turned to Kickstarter again. In the first 36 minutes, solely from women in her Facebook group, some of whom own up to 30 sash bags themselves, MacDonald raised $29,000. As of press time, the campaign had raised $333,752 from 1,831 backers.

Also in June, MacDonald began selling on Amazon. Now, in its sixth year, the company, which has ten employees and has a fulfillment center in Canada with manufacturing done in India, is expanding into two factories in China and is projected to sell 70,000 bags and hit $7 million in sales this year.

MacDonald says her company is successful because of what she learned from her first run as an entrepreneur.

“The mistake I made the first time (with Bagonia) was that I got carried away by validation and hype, but, the only thing I cared about this time was if people could part with their money,” she said. So, despite sparking interest that fall night in 2012, when she first wore the sash prototype out for a night out on the town, she decided on a slower, more experimental approach, gathering a group of her friends to hand-sew more bags which she then took to a tradeshow to further test out the market. That day, she got $20,000 in orders. “That is what I needed to know I could do this,” she said.

In 2013, MacDonald began manufacturing small batches of the bags stateside before meeting her India-based manufacturer, a leather technician named Muralidharan Subramanian, who also works for Nordstrom. And, for three years, she sold face-to-face “anywhere I could get a booth and talk to people in hopes they would walk away with a bag,” said MacDonald, adding that she was a regular at the Little Italy Mercato Farmers Market and the Carlsbad Village Faire, among others, and was making about $300,000 a year in revenue. The hands-on involvement allowed her to learn more about her business, like what her target demographic is (baby boomers) and that the number one use of the bag is for travel. “These are all things I didn’t know,” she said, “and, without the experience, I would’ve made different assumptions.”

The first Kickstarter campaign is what helped the company get over the “sell a bag to make a bag” financial hump, and with the help of some clever Facebook ads, Sash began to see major sales growth. In January 2017, after realizing 40 percent of her orders came from Canada, MacDonald opened a fulfillment center there. And, midyear, she started the Facebook group. In early 2018, she hired five additional people for a total of ten employees.

At the end of August, MacDonald, who completed one semester at Columbia College, a junior college in Northern California, and sources all her fabric from India, will visit China to begin working on the latest expansion. The China factories will focus on what sells on Amazon, while the India factory will produce what sells on the website. The projected revenue for next year is $15 million, as per MacDonald, who says she hopes to sell the company in a couple of years and focus on her next venture: a technology company called Lash.Live, which she founded last year and is currently in beta mode.

“It is as if QVC and Facebook had a baby,” MacDonald said about the business, which is a platform she created with partners Etienne DeBruin and Tyler French, for vendors to sell their products — from plastic containers to kimonos — via live streaming and for buyers to use a one-click system for purchases. The company, for which she raised $160,000 from friends and family, currently has 12 designers and 1,600 shoppers signed up and is expected to go live July 19.