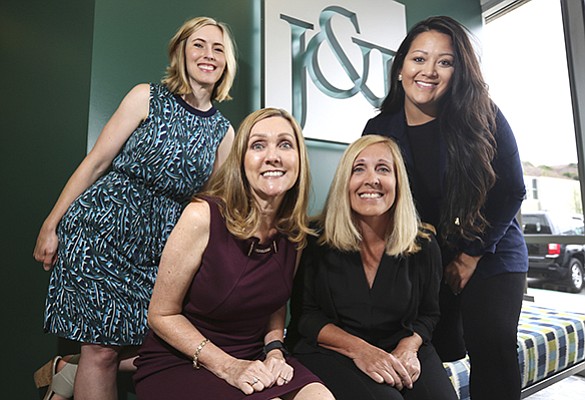 San Diego — In an industry that has failed to attract women in significant numbers, Johnson & Jennings General Contracting stands out.

The San Diego company had a woman as one of its two owners when it was founded in 1981 — Jackie Jennings — and it is owned by two women — Donna Vargo and Naomi Lohnes, who bought it in 2013.

Three of the company’s six project managers also are women.

Field Is Not Representative

Of the top 30 general contractors in the San Diego Business Journal’s Book of Lists, only one has a female local executive.

“Our culture is crafted by the fact that we have two women owners, two women leaders,” Isidore said.

“Women manage things differently,” Vargo said. “We really care about our people. They’re not just a number. We’re very sympathetic. We try to find work-life balances for everybody.”

“That culture has helped us win clients,” Isidore said.

Among the company’s recent projects were the demolition and ground-up construction of a 12,698 square foot pediatric medical clinic and renovation of three other buildings for North County Health Services and transforming an abandoned 10,000 square-foot medical arts building into a homeless veterans’ recuperative care center for Interfaith Community Services.

Johnson & Jennings, or J&J as it is known in the industry, also has contracts for ongoing work with Raytheon, Hazard Center, Cortica, Banner Bank and Union Bank and is in preconstruction work with Academy of Our Lady of Peace for renovations to preserve the historic campus of the girls’ high school and create new STEM (Science, Technology, Engineering and Math) facilities.

“We are excited about the opportunity to partner with the school while simultaneously expanding exposure for new generations of women in the construction industry,” Isidore said.

Ron Sutliff, a project manager with Cushman & Wakefield who worked with J&J on the pediatric clinic and several other projects, said he likes dealing with them because “they are very client sensitive.”

“They really try to respond to what the client wants and to make modifications as to what the client’s needs are,” Sutliff said. “Just as important in a lot of ways, they have a can-do attitude. They’re not negative, they’re positive. I think it starts with Donna (Vargo), but the whole team, they’re very positive.”

The company is certified as a woman-owned business, so it qualifies for contracts with government agencies and with companies seeking diversity in awarding contracts in which such firms are given preference.

“It’s a great thing to have and it definitely is useful,” Isidore said, but Vargo said that in most cases, J&J competes in the general marketplace where the certification is not a factor.

When Vargo and Lohnes bought J&J, they toyed with changing the company name to reflect the new ownership, but Vargo said “J&J was pretty much branded in town.”

“It’s a familiar name in town. We felt it was important to carry on that image,” Vargo said.

She and Lohnes took over managing the day-to-day operations of J&J in 2004, and since they bought the company in 2013, J&J’s revenue has increased by 50 percent, Vargo said, although the company declined to release revenue figures.

The company has expanded into Orange County, opening an office in Mission Viejo about 1½ years ago, Vargo said.

Recently, J&J got its contracting license in the state of Washington and took on several projects in Seattle which could lead to further expansion. It also has ongoing projects in Menlo Park, the Inland Empire and Ridgecrest.

“We’re going to have a slow, planned growth,” Isidore said.

Looking back on the company’s success and her own, Lohnes said that she never would have predicted that she would one day run a construction company.

Like many other women in the business, construction wasn’t Lohnes’ initial career choice. Her introduction to construction came when she went to work for a graphic design firm in 1983 before joining J&J as a part-time bookkeeper in 1986. She has a degree in finance and accounting.

“I just sort of landed in construction and learned about it as I went along,” Lohnes said. “For me, I’m a numbers person. It’s not so much what industry I was in.”

“I just continued to grow with the company,” Lohnes said.

Vargo was an executive vice president of ROEL Construction Co. Inc. for 12 years before joining J&J in 2004. She planned to form her own construction company, but Jackie Jennings persuaded her to join J&J as part of Jennings’ retirement exit plan, with the understanding that Vargo would eventually become an owner.

That plan was delayed a few years by the recession, which J&J weathered better than many of its rivals.

Thanks to a diversified list of clients and two retirements, the company avoided layoffs, Vargo said.

Isidore got a bachelor’s degree in broadcast journalism, and worked as a journalist for about a year in Chile.

“I wasn’t quite sure what I wanted to do,” Isidore said.

She had some connection to construction through her father, who was a subcontractor, but Isidore said, “I was extremely skeptical that that was what I wanted to do.”

Her skepticism disappeared upon meeting the women who worked at J&J 11 years ago.

“I walked into the office and felt like they were women I wanted to work for,” said Isidore, who is a past president of CREW (Commercial Real Estate Women) San Diego.

Ortiz, the project manager, started with J&J as an intern while studying for a master’s degree in architectural design at The NewSchool of Architecture.

She said she was struck by the collaborative culture she found at the company.

‘It’s allowed me to have a voice,” Ortiz said. “I want to continue growing and I felt construction does that for me. It pushed me in a way that I thought I could never be pushed before.”

Vargo, Lohnes and Isidore said they hope that other women will look at them and their company as role models and encourage more women to consider careers in construction.

“There are opportunities for everybody, whether you want to work with your hands or in an office,” Vargo said. “We have people we interview, they’re right out of college and say I really want to work on the job site. Other people prefer being in an office at the desk.”

Some women may be intimidated, either because of a stereotype that construction is a man’s job, or because they don’t see other women in the field, Isidore said.

She said that J&J, by having women in positions of authority, helps dispel the myth and demonstrates that construction is a viable career choice for women.

“You come to this company and you see mentors or sponsors,” Isidore said. “It’s nice to see a woman in a position you want to be in.”

No. of employees: 48 in California and Washington; 38 in San Diego