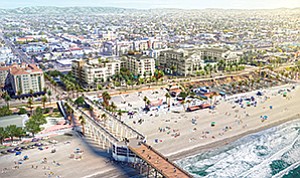 Construction is scheduled to begin by summer on a 160-room hotel, shown across the street from the Oceanside beachfront amphitheatre, and a 226-room hotel to the south. Photo courtesy of S.D. Malkin Properties.

2011: Financing project falls through with elimination of redevelopment

they’re ready to being construction.

San Diego — After more than a decade of false starts, Oceanside is finally getting the beachfront resort hotel project officials have long sought...