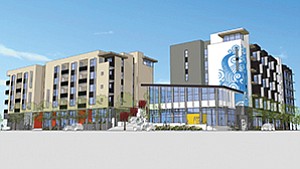 San Diego — Affordable housing for homeless families, individuals and veterans as well as for low income families is getting a boost with several projects opening or under construction.

The drive comes after the number of homeless people rose in 2017 and San Diego Mayor Kevin Falconer and county officials have listed homelessness as one of their top issues.

“We’re starting to have an impact,” said Jimmy Silverwood, director of aquisitions and finance of Affirmed Housing.

“That’s what it takes, a project at a time,” Russell said. “It takes a lot of small bites to get at this problem.”

Affirmed Housing has three projects going in San Diego aimed at getting people off the streets by providing them with a place to live and services they need to get back on their feet and to keep others from becoming homeless by providing low income families with housing they can afford.

The company also has purchased an 11,479 square-foot lot in East Village at 17th and G streets, where it plans to build a seven-story apartment building for the homeless.

Among the projects under way by Affirmed Housing is a $34 million apartment complex — Bluewater Apartments — with 80 units for low income families.

Next to Bluewater Apartments at Twain Avenue and Fairmont Avenue, Affirmed Housing is building The Stella — a $29 million apartment complex with 80 units for homeless veterans.

The company also has a $27 million project to remodel a former Motel 6 at 4370 Alvarado Canyon Road into an apartment complex dubbed Zephyr to provide 84 studio apartments for extremely low income and homeless veterans.

Although the Oceanside project wasn’t targeted at the homeless, “There’s a greater focus on homeless housing now, there are more resources to finance those projects, so you’ll see more emphasis on that,” said Chelsea Investment President Charles Schmid.

The 2017 annual Point-in-Time Count of San Diego’s homeless population by the Regional Task Force on the Homeless found 9,116 people living on the streets or in shelters, a 5 percent increase from 2016.

A new count is scheduled for late January.

The projects specifically targeting homeless veterans and others who are homeless “will make a dent” in the number of people living on the streets in San Diego County, Silverwood said.

“Is it going to solve the homeless issues? No. Is it a step in the right direction? Yes. We as developers can only continue to bring these projects forward to provide a permanent solution to help our homeless,” Silverwood said.

Affirmed Housing in December started construction of The Stella, just this month broke ground for construction of Bluewater Apartments, and began converting the former Motel 6 into apartments in November.

Located within a half-mile of a trolley stop, the Stella will provide permanent housing for homeless vets with on-site support services provided by Interfaith Community Services.

The Stella will have 41 studio apartments and 39 one-bedroom apartments, one of which will be for a building manager.

Apartments average 485 square feet in size and will feature personal kitchenettes and bathrooms.

“Not only will Stella provide for our veterans, but the new community will also enhance a currently blighted street corner, as well as breathe new life into the local neighborhood,” said James Silverwood, president and CEO of Affirmed Housing.

Designed by Studio E architects, the building will feature elevated common areas, a community kitchen, and a multipurpose room.

The renovated Motel 6, renamed Zephyr, will have new flooring and wall surfaces, updated bathrooms redesigned for efficiency, and kitchenettes.

Common area amenities in the Zephyr will include a full kitchen, television lounge, computer room, and multipurpose and meeting rooms.

A 4,600 square-foot office building is being remodeled as part of the Zephyr project to provide space for residents to receive social services to help them find work, go back to school or fill other needs.

The East Village property Affirmed Housing acquired will be used as the site of an 88-apartment building targeting homeless veterans, Silverwood said.

In addition to Villa Storia in Oceanside, Schmid said Chelsea Investments is in planning stages on other projects, including one with Father Joe’s Village for 400 units of permanent housing for the homeless in downtown San Diego.

The Villa Storia apartments were built by Chelsea Investment at Mission and Academy roads under Oceanside’s Inclusionary Housing Ordinance, which requires projects of three or more homes to reserve at least 10 percent of the units for low to moderate income families or pay a fee.

The overall Mission Lane community will include 342 market rate units.

Completed in October, all of the apartments in the two-building Villas Storia were leased by November, Schmid said.

“With these affordable rents, they lease up immediately,” Schmid said. “We have a long waiting list.”

In addition to the Villa Storia, Schmid said Chelsea Investment has several other projects in the planning stages.