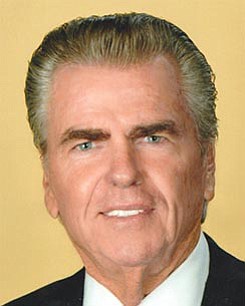 Michael McKinnon is a veteran of more than 50 years in the broadcasting business, currently heading operations of the news-focused, independent TV station KUSI, with studio operations in Kearny Mesa. KUSI is one of the nation’s largest independent stations and news operations. It is owned by his family-run McKinnon Broadcasting, which started in Texas and is now based in San Diego. The company also owns San Diego Home & Garden Magazine, with operations led by his son, Publisher Mark McKinnon. Michael McKinnon is a longtime supporter of conservative causes and candidates in the San Diego region.

FUN FACT: Michael’s father, the late Clint McKinnon, created the San Diego Daily Journal newspaper in 1944. He later acquired an ABC affiliate station in Texas before owning KUSI. McKinnon was also the last U.S. Congressman to represent all of San Diego before redistricting.