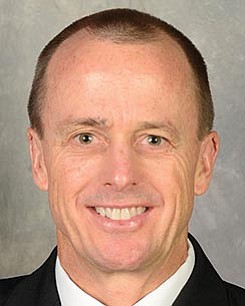 Vice Adm. Mike Shoemaker’s titles are long, but the U.S. Navy unofficially sums them up in two words: Air Boss. He is in charge of Navy aviation. From an office on North Island, his command mans, trains and equips 10 combat-ready aircraft carriers, 10 carrier air wings, 170 aircraft squadrons and more than 100,000 personnel. Getting three stars puts Shoemaker at the pinnacle of his Navy career. Part of his current job involves making the new, Gerald R. Ford-class of aircraft carrier ready for service. As a pilot, Shoemaker has accumulated more than 4,400 flight hours in small military aircraft – the A-7E Corsair and the F/A-18C Hornet – with 1,066 carrier-arrested landings.