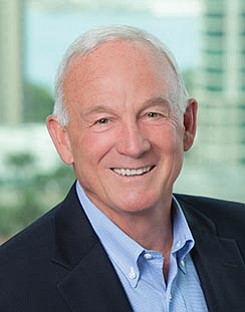 Former mayor and police chief, Jerry Sanders serves as the president and CEO of the San Diego Regional Chamber of Commerce. He joined the police department in 1973. In 1999, he went to the local United Way chapter. He has led turn-around efforts with the American Red Cross in 2002, after a controversy over the use of funds for wild fire relief, and as mayor in 2005 following the resignation of the sitting mayor, while the city was embroiled in a series of scandals arising from misrepresentations of the city’s pension debt. The day after he left office in 2012 he was appointed president and CEO of the regional chamber.

ON HIS POPULARITY AS MAYOR: “I think I’ve always been very honest with people. I think I’ve been approachable by people out in the community.”

OUT AND ABOUT: At one point he lost more than 30 pounds by walking throughout a 15-mile circle with his Kensington home at the center.