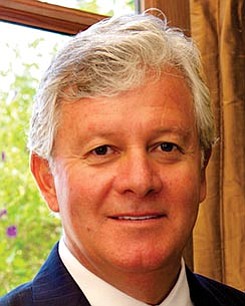 Robert Green founded his commercial real estate development company more than 15 years ago in Encinitas. Green’s nearly 30-year career includes luxury hotel and residential projects in high-profile locations, including the development of the Four Seasons Resort Aviara in Carlsbad, along with Four Seasons projects in Jackson Hole and Palo Alto. In 2017, Green opened the luxury-oriented, $120 million Pendry San Diego hotel in downtown’s Gaslamp Quarter and debuted the upscale Everly Hotel in Hollywood. He is currently in the planning stages of two controversial projects – a hotel along the bay front adjacent to the convention center and a proposed oceanfront resort in Del Mar above dog beach. He is a longtime board member of the Magdalena Ecke YMCA in Encinitas.

PASSION: The wine company he founded in 2009, Robert Green Vineyards.

BEST ADVICE: Know what you don’t know, and don’t ever be afraid to admit it.