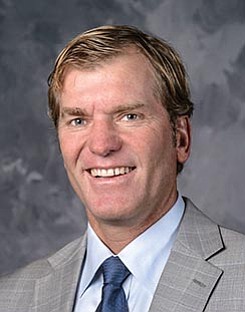 Ernie Hahn is the general manager of the Valley View Casino Center/ San Diego Sports Arena. It’s a role he has held since 1996. He began working with the Arena Group five years earlier, as an event coordinator. His current responsibilities include overseeing the booking, development, sponsorship and other day-to-day operations of the arena with added emphasis on revenue-generating activities. Recent accomplishments include bringing back hockey – the San Diego Gulls – to the arena. The Gulls are now in their third season playing at the San Diego Sports Arena. In the 2016-17 season, the Gulls had the second-highest attendance in all of minor league hockey.

CIVIC INVOLVEMENT: Board member at the Downtown San Diego Partnership.

PERSONAL: “Making sure that I live up to the Hahn name in: my own way and not based on what others think.”

BUSINESS ADVICE: “Treat others as you would like to be treated.”