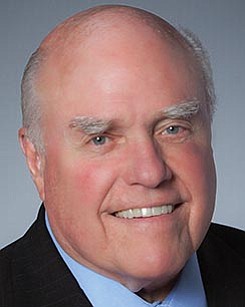 C. Terry Brown is the son of hotel pioneer Charlie Brown, who opened the 46-room Town and Country motor inn in Mission Valley in 1953. He expanded the property in 1970, adding the city’s first convention center and a 10-story hotel tower. In October 2017, a planned realignment and redevelopment of the property was postponed a second time by the San Diego City Council. The $80 million project includes downsizing the hotel from 954 to 700 guest rooms. Conference facilities would be reduced from almost 213,000 square feet to just over 177,000 square feet. Twenty seven structures and a parking lot would be demolished and four six- and seven-story buildings constructed, along with associated parking structures, according to an environmental impact report. A park section would include not only parkland but also the restoration and enhancement of eight acres of river habitat and the creation of a 14-foot-wide pathway. Brown is deeply embedded in the business community and involved in local, state and national politics. He is chairman of the San Diego Tourism Marketing District.