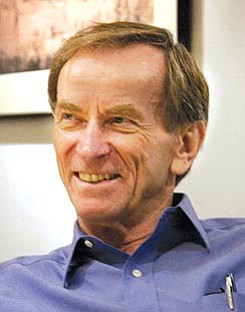 Linden and his brother J. Neal Blue built General Atomics (GA) and its affiliated companies into the powerhouse defense contractor that remains one of the region’s largest employers and a world technology leader. Linden is the more public of the brothers, occasionally showing up at business or defense related events. The Blues bought General Atomics from Chevron in 1986. GA’s portfolio of business encompasses aviation, uranium mining, nuclear engineering, real estate and oil-and-gas exploration. The brothers also own Cordillera Corp. The brothers also own jetCenters of Colorado, a fixed base operator providing fuel, food, hangar space and other services to small plane pilots at Denver’s Centennial Airport, Colorado Springs and Fort Collins. He held high-level posts at Gates Learjet Corp. before becoming CEO of Lear Fan Ltd. Blue also served as CEO of Beech Aircraft Corp. and as a director of Raytheon Co.

Power couple: He is married to the former Ronne Froman, a retired Rear Admiral who once held the local high-profile “Navy Mayor” post.

Farming roots: After graduation he and his brother farmed and ranched in Central America; their projects included a cocoa and banana plantation in Nicaragua.

Early politics: Linden, who mother held state office in Colorado, served for a time on the Denver City Council.

Cuban hostage: In 1961 he spent 12 days in a Cuban jail after Cubans forced him to land his plane. Less than two weeks later, CIA-backed insurgents from Central America attempted to invade Cuba in what came to be known as the Bay of Pigs incident.