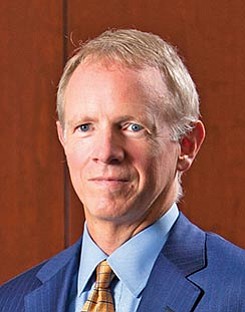 John Case joined Realty Income Corp. in 2010 as executive vice president and chief investment officer. In 2013, he was promoted to president. Through the third quarter of 2017, Case expects Realty Income Corp. to complete approximately $1.5 billion in acquisitions. The firm’s real estate portfolio ended the quarter with occupancy of 98 percent. Realty Income Corp. released 79 properties at a recapture rate of nearly 104%, the fifth-consecutive quarter in excess of 100 percent. Moreover, revenue for the nine months that ended September 30, 2017 increased 11 percent to $905.1 million, as compared with $815.3 million for the same period in 2016. Case came to the firm with 19 years of experience as a New York-based real estate investment banker, most recently as co-head of the real estate investment banking for RBC Capital Markets. He began his career at Merrill Lynch, where he worked for 13 years and was named a managing director in 2000. He serves on the board of Washington and Lee University, as well as professional groups including the President’s Council of the Real Estate Round Table.

HALLOWED GROUND: He is only the third CEO in the firm’s 47-year history.

BIG NUMBERS: He has been responsible for more than $100 billion in real estate capital markets and advisory transactions.