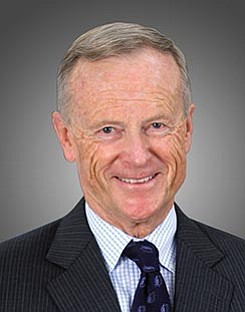 J. Neal Blue and his brother Linden built General Atomics (GA) and its affiliated companies into the powerhouse defense contractor that remains one of the region’s largest employers and a world technology leader. The company is based in La Jolla and also has a massive manufacturing facility on the east edge of Poway, where it builds the Predator drone. His son is now CEO of GA Aeronautical Systems Inc. Blue is intensely private and makes few public appearances; one acquaintance describes him as a recluse. In 2013, he accepted the International von Kármán Wings Award – recognizing great feats in aviation – during a ceremony at CalTech in Pasadena. The Blues bought General Atomics from Chevron in 1986. GA’s portfolio of business encompasses aviation, uranium mining, nuclear engineering, real estate and oil-and-gas exploration. The brothers also own Cordillera Corp. The brothers also own jetCenters of Colorado, a fixed base operator providing fuel, food, hangar space and other services to small plane pilots at Denver’s Centennial Airport, Colorado Springs and Fort Collins.

COVER SPREAD: He and his brother were on the cover of Life Magazine based on their 110-day tour of Central and South America in a single-engine Tri-Pacer in 1956.