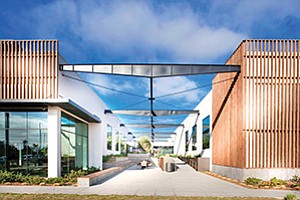 The Make office campus, on Avenida Encinas in Carlsbad, is home to a number of tech companies. The complex was developed to encourage interaction between employees of various companies and improve workers’ work-life balance, with an assortment of amenities including a gym, cafe, bike locker and surf shower. Photo courtesy of Cruzan

San Diego — Carlsbad is known as one of San Diego’s largest tech hubs, but that’s no longer simply because of its corporate successes, such as Viasat Inc.

Dozens of emerging companies started by local entrepreneurs have selected the city as a launching pad in recent years. From 2014 to 2016, nearly 100 startups were established in the coastal North County city, according to a report by San Diego’s Connect.

Founders say the quality of life in the area helps attract and retain talent.

And companies, both established and emerging, are finding that real estate developers are responding to interest in more modern, flexible workspaces. 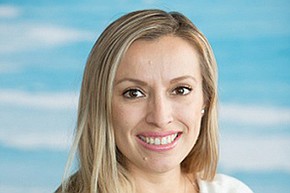 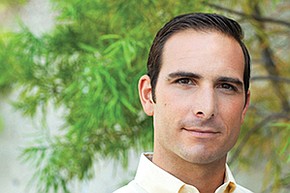 The Make campus, developed by Solana Beach-based Cruzan, sits 400 yards from the beach. Jim Mandler, who oversees property operations at Make and also spearheads the amenities arm of Cruzan, said the unique property, which has ample parking and easy freeway access, was developed with companies dedicated to providing a special place for employees to work in mind.

“We said, from a profile perspective, who are we building this for? What would they care about, and what would their employees value?” Mandler said. 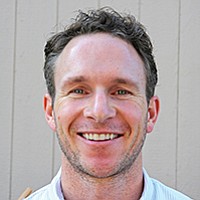 Instead of building an office tower, Cruzan redeveloped the building, an industrial warehouse on Avenida Encinas formerly home to the Floral Trade Center, into an amenity-rich complex, with a café, gym and areas that encourage collaboration.

GoPro moved in first. Other tech firms have followed, including Verve, which does mobile marketing.

Kyle Slager, founder and CEO of Raken, a company that has developed an application that construction contractors use to develop and submit daily reports, also decided to get its first office space there.

He said living in North County has proven a draw for employees.

“It’s is one of the most desirable places to live on Earth, there’s a lot of great talent, and there aren’t hundreds of other companies to choose from,” Slager said. “We’ve also added a handful of team members that moved here from other parts of the country in part because this is such a great place to live.”

Some Raken employees live in downtown, but don’t mind the trek north because of the beachside work site, he said.

The fact the city has been able to retain a company like Viasat — which provides satellite communications ground equipment and services — is indicative of the business climate, Slager said.

“That benefits the entire ecosystem as talent is recycled in the community,” he said. “Because it’s such a desirable place to live, I expect this trend to continue.” 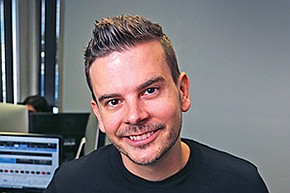 He said it’s exciting to be part of a growing ecosystem of entrepreneurs.

“In the past few years, we’ve seen San Diego go from almost no coworking spaces to several in Carlsbad alone,” he said. Talent is available, he added.

“With every position we post, there’s a huge amount of interest, and typically several very qualified candidates,” he said. “Carlsbad in particular is a fantastic place to start a business, with employees who come from the south typically going the opposite flow of traffic during rush hours.”

For those pitching investors for funds, it can be convenient to be near the financiers who have settled in North County, Groset added.

“In terms of raising capital, there has never been a better time given the economic climate specifically in North County,” he said.