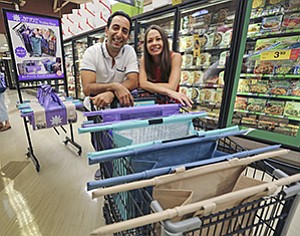 Farzan and Jen Dehmoubed, owners of Lotus Trolley Bag, in an aisle inside the Ralphs at 7140 Avenida Encinas in Carlsbad, displaying reusable grocery bags they created. Photo by Jamie Scott Lytle.

San Diego — Some reusable bag makers in California were pleased when voters affirmed the state’s single use plastic bags ban in November 2016, but hesitant to attribute their successes and steady revenue to the bill itself. However, Lotus Trolley Bag based in Carlsbad was inspired to start its business because of the law.

Jen and Farzan Dehmoubed, the husband and wife team behind Lotus Trolley Bag, paid close attention to consumer behavior after the ban went into effect. They observed grocery shoppers struggling with multiple bags under their arms or taking up space in their cart. At checkout, they saw bags not propping up easily, bags being placed on the floor, and customers forgetting their bags altogether. They thought consumers lacked shopping processes that were organized, fast, and easy.

“We wanted to come up with something that kind of met all of those needs,” said Jen Dehmoubed.

Today, the couple is rapidly expanding the market

Senate Bill 270: Passed in November 2016, upholding the 2014 law to ban single use plastic bags. Stores can still provide reusable plastic or paper bags but must charge customers 10 cents for them.

Assembly Bill 1294: Requires plastic manufacturers to be more transparent about the recycled content of their products. Approved October 2017.

Assembly Bill 319: Aimed to reduce plastic bottle cap waste by restricting stores from carrying bottled drinks with caps not attached to the container. The bill died on its third reading Feb. 1.

Assembly Bill 1884: Would require restaurants to have a straws-upon-request policy in order to reduce plastic straw waste. Bill was introduced in January and is currently under review.

for their product. Since their start in June 2017, the Dehmoubeds have sold about 12,000 bags. They estimate their revenue for 2017 to be about $350,000. And, the Dehmoubeds say they are expecting $3 million to $4 million in revenue this year through online and retail sales.

Getting on the Shelf

Many grocery stores in San Diego have noticed Lotus’ appeal and decided to carry the product. These include: Vons, Ralphs, Lazy Acres, Frazier Farms, Jimbo’s…Naturally, and Mother’s Market. Lotus is currently discussing possibly selling its product at Whole Foods and Target and just got approval to sell at an additional 15 Ralphs stores.

Senate Bill 270, the single use plastic bag ban, didn’t directly cause the growth of reusable bags companies like Lotus Trolley. However, Richard Carson, a professor of economics at University of California, San Diego says the bill may have influenced retailers and other businesses to make more reusable bag choices.

Consumers can now select reusable totes available for free as promotional items and bags some retailers make to market themselves.

“One of the interesting things that you can see is now lots of stores actually give you reusable bags that you can use for your grocery shopping with their advertisement on it,” says Carson.

Lotus Trolley’s bags, however, were designed explicitly to speed up the grocery shopping process which bags provided via promotions or by retailers couldn’t seem to do. After studying various reusable bags on the market, Jen and Farzan Dehmoubed, a private tutoring company owner and former advertising entrepreneur respectively, went to work on a design.

They came up with four reusable polypropylene bags that roll out accordion style to suspend within a shopping cart for quick check out. The bags Velcro together to hang onto cart handles, to stow away when not in use, and to serve as a reminder to bring bags to the store. The bag set, which includes a cooler bag and storage for delicate items like eggs and bottles, can also be separated to use individually. Some companies in the U.K. and Australia have created similar designs but the Dehmoubeds say Lotus Trolley is unique to San Diego.

The Dehmoubeds named the product after a lotus because the way the bags fold is similar to the flower blossoming. Jen, a practicing yogi, thought the name as well as the bags’ gentle pastel colors and eco-friendly qualities would appeal to Southern Californians interested in healthy lifestyles.

Other reusable bag makers in California are happy single use plastic bags are banned but don’t necessarily attribute their steady business success to SB 270.

On Nov. 8, 2016, Californians voted in favor of Proposition 67, the statewide Single-Use Carryout Bag Ban, affirming SB 270 — passed into law in 2014 banning single use plastic bags at grocery stores. The ban went into effect immediately, stating most grocery stores and other types of retail stores could no longer provide single-use plastic bags. Instead, they could sell shoppers a reusable grocery bag or paper bag for at least 10 cents.

Requirements for reusable bags were also defined in the new law. Plastic bags can still be used but they need to meet certain requirements. For example, they have to be thicker so as not blow around and litter as easily as thin single-use bags.

Emily Sugihara, CEO of fashion bag company Baggu, says there was a lift in sales in her reusable grocery bag design after SB 270 passed. Sugihara, a Del Mar native, says her business has steadily grown since beginning in 2007 but not necessarily because of SB 270. Other factors, like her marketing team expanding in 2016, also likely contributed to the increase in sales.

ChicoBag, which backed Proposition 67, has also seen growth since its inception. Like Sugihara, ChicoBag CEO Andy Keller doesn’t think growth was directly caused by the single use plastic bag ban. Keller says his customers were already environmentally conscious and looking to ChicoBag as a solution to make shopping easier.

1 Bag at a Time in Los Angeles also backed Proposition 67 in part to support its ongoing business. General Manager Frank Lavarini says his business didn’t have a boom post-ban because reusable bags have become more widely available for free through promotions and events.

“There’s a lot of inventory out there already,” said Lavarini. “So it’s not like there was a dearth of reusable bags before the proposition.”

An apparent effect of single use plastic bag bans is the positive ecological impact in cities with long standing bans. In San Diego, the impact isn’t as certain but data gathered on 2017 beach clean ups by San Diego Coastkeeper suggests favorable results.

“We’ve been finding between 4,000 and 5,000 plastic bags per year during our beach cleanups here in San Diego for the last several years,” says Kristin Kuhn, programs director with San Diego Coastkeeper. “But in 2017 that number actually dropped to just over 2,300 bags.”

Kuhn adds that although this is just one year of data, it’s still promising.

Like other California reusable bag makers, Lotus Trolley has found success in providing a product to a growing environmentally conscious consumer base.

Farzan Dehmoubed doesn’t believe Lotus’ accomplishments would have been possible without SB 270, however. He says that if the ban wasn’t there people wouldn’t be in a mindset to think about the convenience of an item like Lotus Trolley Bag.

“We find once people start using the product,” he says, “they’re just like, ‘what did I do before?’”

No. of local employees: 2