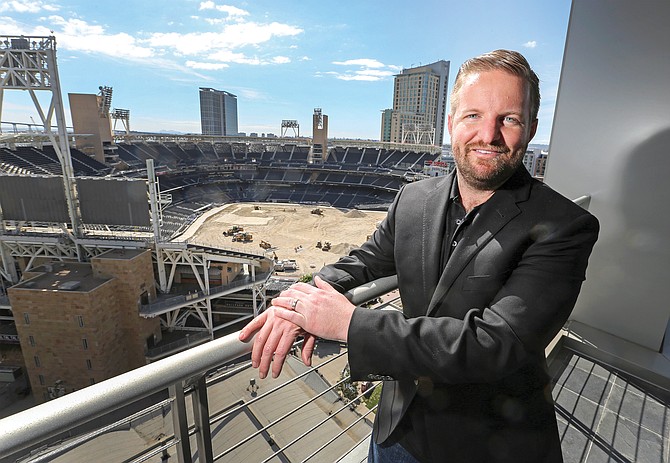 Jeff Winkler, CEO of Origin Code Academy, stands on a balcony at the company’s new office in DiamondView East Village, a 15-story office tower next to Petco Park. Photo by Jamie Scott Lytle.

San Diego — School can be stressful. 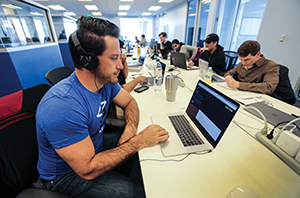 Student Bobby Patterson, left, studies in the main room at the Origin Code Academy in downtown.

For professionals looking to switch careers in a matter of months to a new job requiring new technical skill, it can be overwhelming.

“In the first two weeks of the program, I would always have at least one person cry in my office,” said Jeff Winkler, founder of Origin Code Academy, a San Diego-based coding school.

That was before Winkler revamped the program by “flipping the classroom,” as it’s known in education; moving from traditional lecture-based learning to a digital curriculum bolstered by instructors when needed. He also decided to make start dates and end dates more flexible, to account for life’s inevitable hiccups.

Origin Code is one of a few education companies based in San Diego offering months-long courses in software development and complementary career services — programs colloquially known as “coding boot camps.”

Winkler, who launched the company in 2015, said he noticed the 12-week schedule through which coursework was offered over the first two years was adding to students’ stress levels, and making the program unworkable for some because of the period between start dates.

“When you’re under that much stress, your learning capability goes close to zero,” Winkler said.

Coding boot camps aren’t new, but some entrants into the market have struggled.

Dev Bootcamp, a pioneer of the genre, launched in San Francisco in 2012. Test-preparation course maker Kaplan bought the company a few years later, pledging expansion. A San Diego office, opened in 2015, was part of that expansion. But the company closed in 2017, citing financial difficulties.

So did Iron Yard, which was founded in Greenville, South Carolina, in 2013, and expanded — with backing from the Apollo Education Group, which owns the University of Phoenix — to campuses across the country.

Tuition at Origin Code is $13,500. Learn Academy charges $12,500 for its course, which includes a guaranteed one-month internship following its three-month program; it also has a $499 weekend-long course.

Winkler said the trick to success — his company is profitable, although he declined to disclose revenue — lies not primarily in attracting students, as the demand for tech talent is taking care of that, but in finding the right teachers. Nearly all students at Origin are career changers, age 25 to 35, inspired to learn new skills and increase their long-term earning potential, Winkler said. Nearly 120 have gone through the program so far; 98 have subsequently landed jobs.

“Scaling an education company is not like software,” he said. “You can say, hey, we’re going to have 15 locations tomorrow, but you can’t hire 15 great sets of teachers tomorrow.” 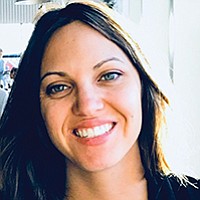 Lisa Thomas is among the graduates that Origin Code has help land jobs after completing its coursework.

Thomas, who taught elementary-school students for five years in the Bay Area, with a focus on science, technology, engineering and math during the school year, and coding camps during the summer, relocated with her husband to San Diego in 2017.

The change prompted her to reconsider her career path, and to pursue her interest in coding professionally.

After Origin Code, she was hired as a quality and assurance analyst at Oceanside-based HireAHelper, a software company that has developed a platform that links people and professional movers. 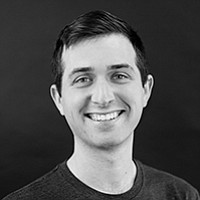 Jonathan Lancaster was working as a chef as the Grand Del Mar when he began exploring coding on his own. He took a course at a community college to learn but, but still felt his knowledge was lacking.

“I hit a wall on teaching myself,” he said. He saw attending a coding school as a way to fast-track more learning.

He completed the Origin Code program, then was hired as a front-end developer at Brand Value Accelerator (BVAccel), a digital marketing agency for e-commerce companies.

Interest in coding schools is being driven primarily by professionals, such as Thomas and Lancaster, who are looking to switch into a high-paying technology career, Winkler said. Wages are being driven upward by increasing demand, which is forecast to continue: In the next decade, web development jobs are expected to increase by 15 percent, much faster than average.

MindTouch, a software-as-a-service company in San Diego, has hired a number of graduates from Origin Code.

Corey Coto, head of engineering, said those hired have proven a good fit.

Professionals who switch careers, although they may not have strong technical skills as of yet, tend to have developed skills in their former professions that make them well-suited for a new workplace, Coto said.

Demand for people with programming skills is high in San Diego, from startups to companies such as Qualcomm, which hires hundreds of junior developers annually.

MindTouch, which has about 100 employees and is actively hiring, works proactively to find skilled workers for its job openings, participating in networking events and hosting monthly hackathons to ferret out talent. And Origin Code recently started hosting a job fair for students and prospective employers, which Coto has attended.

Coding boot camps based elsewhere have begun eying San Diego as a market for expansion. 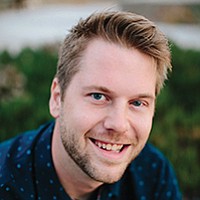 Jordan Zurowski, Thinkful’s local community manager, said the company saw enough demand for graduates in the San Diego region that it decided to offer students the option of an income-share agreement (ISA), which allows tuition to be paid based on employment income following the program.

“San Diego has a healthy market with a mix of larger organizations and startup growth, so there’s a lot of opportunity for individuals to have a main (development) team role within a small or medium tech company or become a junior developer at a larger organization,” Zurowski said.