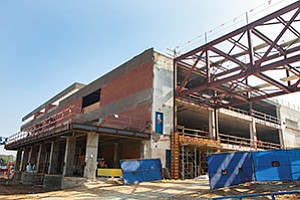 Ampersand in the final phases of construction. Photo by Melissa Jacobs. 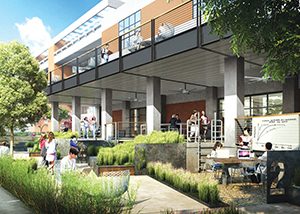 Rendering shows what Ampersand will look like when finished. Rendering courtesy of CBRE 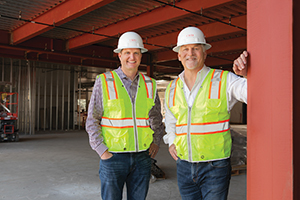 San Diego — As he walked through the hollowed-out shell that once was the Mission Valley home of The San Diego Union-Tribune, Casey Brown reminisced about what it once was.

“When I was in the third grade, I took a tour of this building,” Brown said.

That was soon after the Union-Tribune moved from downtown San Diego.

As the new owner of what’s been renamed Ampersand, Brown’s firm, The Casey Brown Co., is transforming the newspaper’s former two-building campus into a top-of-the line office complex with amenities few other office buildings can match.

“There’s nothing else like this,” said Matt Carlson, senior vice president of CBRE, which is handling leasing of the 330,000 square feet of office space that’s being created in Ampersand.

“You really have to see it to understand it.”

Working with Carlson as part of the CBRE leasing team are Ryan Grant and Jeff Oesterblad.

The Casey Brown Co. is the owner of the buildings and the overall developer. The general contractor is CW Driver.

Most of the work on the more than $40 million project is finished.

As of mid-February, John Kenney, principal with The Casey Brown Co., estimated 60 percent to 70 percent was done, with plans to begin signing leases with tenants in May so they could start interior construction work on the space they’ll use by summer.

At peak construction, as many as 250 people worked on the project at any one time, Brown said.

Ampersand is part of a surge of new developments either under way or planned in Mission Valley.

The name for the former Union-Tribune complex, Ampersand, was picked to recognize its newspaper history, Brown said.

An ampersand is the last figure in a typesetter’s alphabet.

When the Union-Tribune stopped its presses for the final time in 2016, an ampersand was the last character printed.

“It’s not marking an end, but a beginning,” Brown said.

The new beginning starts at the front door to the five-story former newsroom building on the east end of the site.

The lobby has been moved from the north end of the structure to the west side, opening into a courtyard that’s being created between what was the newsroom and the press buildings.

The courtyard will have outdoor work spaces and space to just relax and hang out, along with a small outdoor amphitheater that seats about 30 people.

The interior of the newsroom building has been gutted to expose walls and ceilings.

Letting in the Daylight

The 14-foot ceilings with windows on all sides gives the edifice lots of daylight — itself an amenity which tenants seek as the aim to attract a millennial workforce, Carlson said.

“The whole idea is tenants want plenty of floor space,” he said.

There’s plenty of that, with floor plates of 35,000 square feet in the news building.

Thanks to glassed-in walkways that connect the two buildings on the second and third floors, tenants have the option of taking over an entire floor on those two levels to get a combined work space of 85,000 square feet, Carlson said.

The interior will be left unfinished, with exposed brick walls and ceilings.

“Folks will do their own tenant improvements,” he said.

A small outdoor patio to the rear of the news building is being remodeled into what’s been billed as “the tree house” to show off a large ficus tree at the south end.

Although not yet in place, the plan is to hang hammocks and hammock-like chairs from the tree and place soft furniture around the patio.

As striking as the changes are to the newsroom building, the renovation of the former press building is even more remarkable.

The presses were removed at the outset. Some went to South America, but there was no real market for most of them, so they went to scrap, Carlson said.

The press building itself has been completely reshaped into a large U, with the roof removed and floor-to-ceiling windows carved out of the brick walls, using a giant saw specially made for that purpose because the walls were so thick.

“This was a very cool and interesting thing to watch,” Carlson said. “The blade was like four feet in diameter and there were custom tracks built along the wall.”

The saw moved along the tracks as it cut through the wall.

A new glassed-in walkway “sky room” connecting the two buildings on the top floor is wide enough to have conference rooms built in along the way, depending on what tenants want.

Nine patios ring both buildings, and there’s a 5,000 square-foot fitness center on the first floor of the press building and a café on the north side of the

Plans also call for the complex to include a bicycle center, with lockers and parts for minor repairs.

Longer term, Casey Brown said he has tentative plans to build a 140-unit apartment complex on the north end of the site along the San Diego River, but the timing will depend on how other nearby apartment complexes fare.

“There’s a lot of apartments being built. We’ll see how they do,” Brown said.