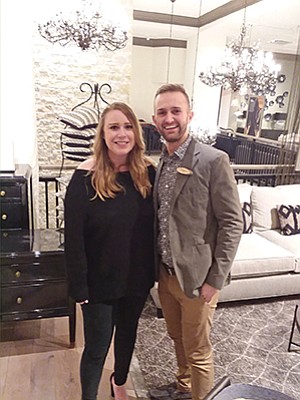 Promises2Kids, a San Diego-based nonprofit with a focus on foster care and children’s welfare, provides more than 3,000 current and former foster youth in San Diego County with the tools, opportunities, and guidance they need to address the circumstances that brought them into foster care, overcome the difficulties of their past, and grow into healthy, happy and successful adults.

Tonya Torosian, CEO of Promises2Kids thanked Arhaus and said: “It is because of companies like Arhaus and charitable members in our community that we can continue offering programs that benefit current and former foster youth in San Diego County.” Visit promises2kids.org.

The Scripps Research Institute announced that the Skaggs family has made a lead gift through their foundations toward TSRI’s $100 million campaign to establish fellowships for all students in its graduate program. In recognition of this gift, the program will be renamed the Skaggs Graduate School of Chemical and Biological Sciences.

The Skaggs family’s gift will make it possible for individual supporters of the graduate program to donate $500,000 that will then be supplemented by an additional $500,000 from The ALSAM Foundation (a Skaggs family foundation founded in 1984) and the Skaggs Foundation for Research to create a $1 million endowment for an individual named student fellowship.

Beginning in the 1980s, food and drugstore pioneer L.S. “Sam” Skaggs and his wife, Aline, began making numerous financial gifts to the institute, including underwriting the construction of The Aline W. & L.S. Skaggs Nuclear Magnetic Resonance Spectroscopy Center. In 1996, their commitment of $100 million — at the time, one of the largest gifts ever to higher education — created The Skaggs Institute for Chemical Biology.

“This transformational gift by the Skaggs family to our graduate program is a vote of confidence in our continuing strategy of building excellence in education and research, which are inextricably linked,” says Peter Schultz, TSRI president. “It recognizes the outstanding scientific discoveries that have been and will continue to be produced by the students of TSRI’s top ten program.”

The San Diego American Indian Health Center announced that it named Dr. Ben Mousavi as its new COO and medical director. Mousavi is a dedicated and disciplined physician experienced in managing clinical care and administration in hospitals and clinical settings.

Padres Pedal the Cause has donated more than $2.4 million to support cancer studies at the Salk Institute for Biological Studies, Rady Children’s Hospital, Moores Cancer Center at UC San Diego Health and Sanford Burnham Prebys Medical Discovery Institute. The check was presented to representatives from the four organizations recently and was the largest donation ever made by the grassroots organization.

Hundreds of cyclists participated in the fifth annual Pedal the Cause, held at Petco Park in November. The Salk Institute team featured 18 riders and raised nearly $25,000. Proceeds from the event support innovative cancer projects with a major emphasis on collaborative, translational research that offers a clear path to clinical trials.

To date, Padres Pedal the Cause has raised more than $7 million to fund 31 cancer research projects. One of the projects is Salk assistant professor Graham McVicker’s work on acute lymphoblastic leukemia, the most common childhood cancer. Visit salk.edu.