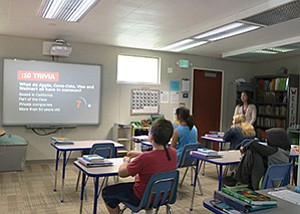 The money will go toward interior furnishings and teaching aids and equipment, including projectors, whiteboards and desks, for the two new classrooms at the academy campus in Kearny Mesa.

The school serves students with behavioral and academic challenges beyond what public schools can provide even in special education classes.

The academy enrollment has grown by nearly 50 percent during the last few years and will serve more than 100 students during the current school year, as well as its expected to grow in the coming years.

Founded in 1887, the San Diego Center for Children is in eight locations and hundreds of homes across the county. The center provides therapeutic care, specialized education and critical life skills to more than 1,000 children and their families. The center’s academy, certified in 2005, is a fully accredited nonpublic school, which is funded by and works in partnership with local school districts.

Moisés Barón, president and CEO of the San Diego Center for Children said: “The new classrooms are essential in helping us meet the current and future needs of our students.” Visit laspatronas.org.

Longtime journalist and Alzheimer’s advocate, Kristen Cusato, has joined the San Diego/Imperial chapter of the Alzheimer’s Association as associate director of communications. Cusato was in local television news for more than 20 years and was most recently communications manager for Sanford Burnham Prebys Medical Discovery Institute.

Cusato brings a personal understanding of the struggle that patients and families of those affected by Alzheimer’s experience after the loss of her mother to a related disorder.

“Taking care of her as she slowly went away was so incredibly hard,” Cusato said. “My mother’s disease gave me a passion and a purpose: to help others with dementia and their caregivers and to push for a world without Alzheimer’s.” Visit alz.org/sandiego/.

A team of students from the University of San Diego claimed victory at the Deloitte FanTAXtic case study competition by presenting the best analysis on a complex, issues-driven business tax case. The USD team won first place and received a $10,000 institutional award, and students Andrew Cole, Michael Diaz, Simon Finnie and Barbara Machado each received $2,000 in scholarship money.

Steve Kimble, chairman/CEO, Deloitte Tax LLP said: “Students participating in this competition are getting real-world experience to prepare them for a career in tax, which requires a diverse skillset and innovative thinking. Visit San diego.org.nt sandiego.org.

The Helen Woodward Animal Center announced that it received a donation from dog food manufacturer Blue Buffalo Co. Ltd of more than 33,000 pounds of dog food. Representatives from more than 20 animal rescue groups from across Southern California picked up 1,500 pounds each of the high quality pet food from the animal center.

The Helen Woodward Animal Center and Blue Buffalo have joined forces since 2013 to help other rescue organizations through far-reaching projects like the annual Home 4 the Holidays Campaign, which adopted-out more than 1 million pets over this past holiday season alone and the AniMeals program, which recently expanded to provide high quality pet food to wounded military clients with service dogs in need and other signature pet adoption awareness campaigns.

In related news, the center recently held its official groundbreaking for a brand new adoptions building. The construction of the new building marks the second phase in the Campaign for Caring — a multiyear mission to rebuild the 46-year-old Helen Woodward Animal Center’s aging facilities. The plans include desperately needed improvements to its surgery suite, new exam rooms and kennels.

The project is important due to the growth and increase in the number of animals served today versus its founding. In 1972, 300 animals came through the center doors. Today, approximately 3,500 pets receive lifesaving medical care and placement each year. Additionally, the Animal Center now accepts 95 percent of its “orphan”pets from animal shelters around the country, all requiring physical and behavioral exams upon entry, as well as vaccinations and spay/neuter surgeries. Visit animalcenter.org