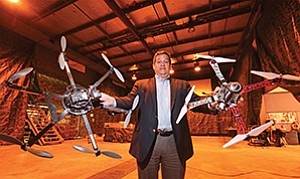 San Diego — Chula Vista officials have long envisioned it as a university campus. But a sprawling plot of land in the eastern part of the city has become a place for aerospace.

Businesses use the site to test drones as well as related equipment, such as sensor electronics. Action Drone, a Chula Vista company, oversees activity at the site.

It’s a foundation that city and economic development leaders would like to build on.

Chula Vista is trying to raise its status as a technology city by getting Federal Aviation Administration recognition as a drone testing city. It is pursuing that designation in tandem with the city of San Diego.

The 375-acre Chula Vista site is the biggest — but not the only — area for testing drones in San Diego County, according to a new, federally funded study. The study, prepared for the South County Economic Development Council, provides a local inventory of university programs involving drones as well as a list of test sites, both indoor and outdoor.

EZ Drone has an indoor facility on Miramar Road. Coleman University’s indoor test site, called the Hornet’s Nest, is run by the Electric and Networked Vehicle Institute, or ENVI.

Qualcomm Inc. (Nasdaq: QCOM) has tested drones at its headquarters campus on Sorrento Mesa. The big corporation has made arrangements with the FAA and is required to contact the control tower at the nearby Miramar air base well in advance of doing any tests.

Other facilities are planned. UC San Diego has designs to build a 30-by-50 foot drone cage. Cages are an advantage, the new report says, because they keep drones out of FAA-controlled airspace.

The study also lists the sites of 14 drone hobbyist clubs — including that of the First Weedwacker Aerosquadron in Lakeside.

Then there is the South County site, near the Chula Vista Elite Athlete Training Center.

Companies can reserve time at the Chula Vista site by going to a website run by a third party, Airmap.com. Action Drone, which was founded by Darryl Anunciado, coordinates the activity on the land.

Action Drone’s main business is producing small drones for industrial purposes, such as inspecting wind turbines. It frequently tailors its products to a client’s specifications. “In this business you have to customize,” said company spokesman Juan Pablo Morfin.

Action Drone also offers pilot training classes. And, it has a branch office in Denmark.

The value of the Chula Vista site may be in testing not aircraft but the sensors that they carry, said Cindy

Gompper-Graves of the South County EDC.

There are opportunities to make the site more useable, she said. It could use restrooms, and it could be adapted for testing swarms of unmanned aircraft.

Local officials had proposed the Chula Vista university parcel during the high-profile site search conducted by Amazon for its second campus. Amazon passed up the offer, announcing its decision this month; the e-commerce giant chose 20 semifinalists, with Los Angeles as the only pick in California.

In addition to their drone test site, Chula Vista officials noted their city is already a testing ground for autonomous vehicles.

The U.S. Defense Department’s Office of Economic Adjustment helped pay for the survey of unmanned aircraft test and training sites, drawing money from an account for Community Economic Adjustment Assistance for Reductions in Defense Industry Employment. The Ranger Group prepared the study.