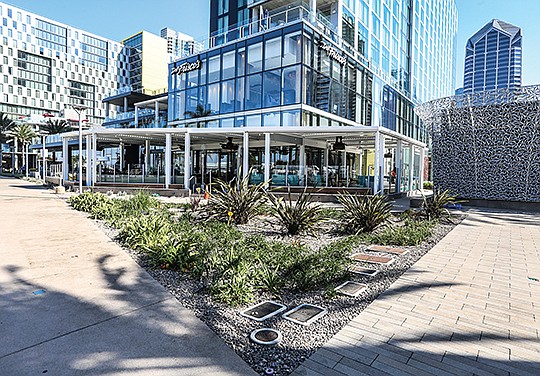 On Nov. 3, Del Frisco’s Double Eagle Steakhouse at the waterfront InterContinental San Diego hotel opened its doors. Despite joining the buzzing downtown area, which is saturated with nearly a dozen other steakhouses, business at the 16,650 square foot, $10 million, two-story restaurant is “as good as projected,” said a spokesperson.

From chains like Ruth’s Chris Steakhouse and Morton’s The Steakhouse to locally-grown ones like Lou & Mickey’s, ZIP code 92101 near the San Diego Convention Center, Petco Park, the Gaslamp Quarter and the harbor, has been replete with steakhouses for some time now. Others include Fleming’s Prime, STK San Diego, Greystone Prime Steakhouse & Seafood and Born & Raised.

While Del Frisco’s was well-aware it was entering an area with a heavy concentration of steakhouses, general manager Michael Manoocheri state during a hard-hat tour held in October, “there are steakhouses in every corner in this area,” the restaurant banked on its ambiance. Aside from its celebrated steak options, Del Frisco’s also boasts an award-winning wine list of more than 1,400 selections, as well as décor with ocean-like blue hues and browns and copper to represent beach sand.

Manoocheri said the Del Frisco’s took the time to visit other steakhouses in town as part of its research.

“There are so many great restaurant companies out here in general, and a lot of those are steakhouses, but, I feel there are plenty of savvy diners in San Diego that are discerning and are probably willing to try us,” he said