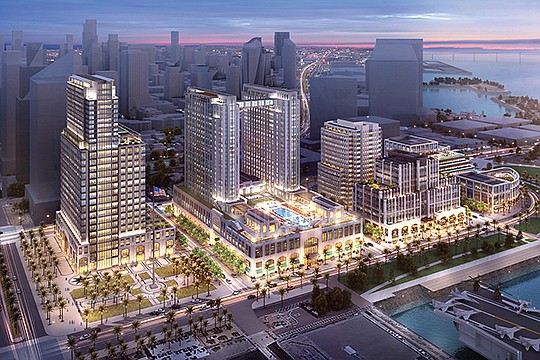 After more than a decade of planning and a flurry of lawsuits, developer Doug Manchester in June broke ground for construction of the $1.5 billion Manchester Pacific Gateway project to remake 13.5 acres of downtown San Diego.

With construction underway, Manchester Financial Group has started pre-leasing space in the massive project and expects that tenants will be able to start moving in by 2020.

More than four acres will be dedicated open space, including a 1.9-acre plaza.

“It will be a huge construction project but exciting, and it will transform the waterfront and downtown San Diego,” Project Development Manager Perry Dealy said at the time of the groundbreaking. “At the end of the day, it’s going to be a phenomenal project.”

Completion dates will be staggered, Dealy said, with everything due to be done by mid-2021.

Manchester was awarded a 99-year lease on the bulk of the project in 2006 in exchange for building new regional headquarters for the U.S. Navy.

The project is bounded by Broadway, Pacific Highway and Harbor Drive.