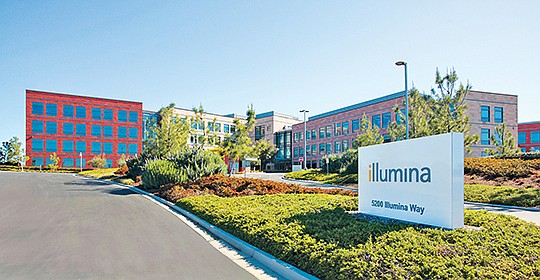 Illumina shares have increased in value by about 40 percent in 2018.

Illumina’s “short-read” platform deciphers fragments of DNA and reassembles them, while Pacific Biosciences specializes in decoding lengthier DNA chunks. This will give Illumina a more complete view of the genome.

Another acquisition earlier in the year provided the company with a need for speed.

That could mean, for instance, faster test results for a doctor deciding on the best course of care.

Besides acquisitions, rising sales pumped up Illumina’s stock. Its shares traded at $313.58 on Dec. 19, up almost 40 percent from year’s beginning.

With new frontiers opening up in genomics, ex-Illumina executives have formed their own companies. Most of at least nine local upstarts with an Illumina pedigree have surfaced in the last two years, as covered in a September San Diego Business Journal article.