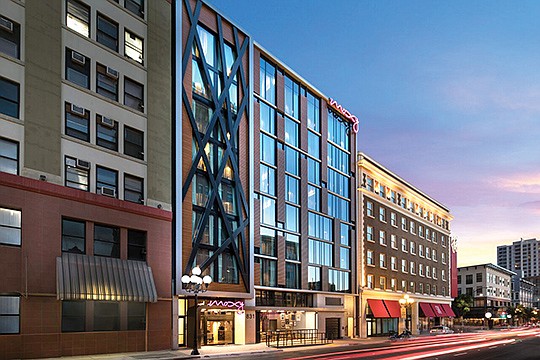 The Moxy Hotel opened in November in downtown San Diego. Photo courtesy of the Moxy Hotel 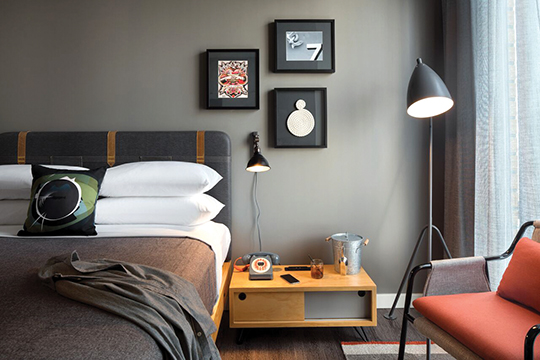 A guest room at the newly opened Moxy hotel in downtown San Diego. Photo courtesy of the Moxy Hotel 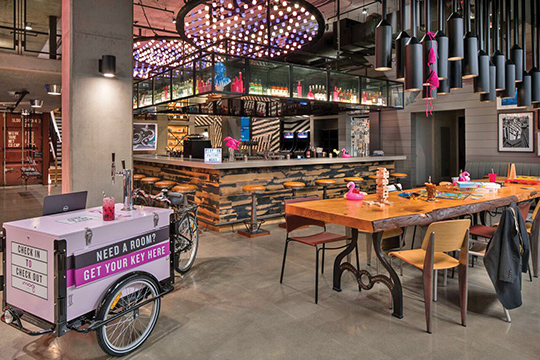 Guests at the newly opened Moxy hotel check-in at this “trike” instead of a typical hotel counter. Photo courtesy of the Moxy Hotel

Downtown San Diego has a new hotel that “flips the conventional hotel service model on its head.”

So said Tim Billing, general manager of the 126-room Moxy that opened in November at 831 Sixth Ave., on what used to be a surface parking lot.

Moxy is Marriott International’s brand meant to lure the so-called millennial generation — those in their 20s and 30s.

Developed in partnership with J Street Hospitality based in San Diego and Azul Hospitality Group, the nine-story San Diego Moxy is Marriott’s first Moxy in California.

There’s no mistaking the Moxy for any of Marriott’s more conventional hotels.

“When you have it, you don’t need the clothes,” reads a Moxy brochure, with a photo of partially-clothed 20-somethings in the midst of a pillow fight with feathers flying everywhere.

Right up front facing the entrance to the hotel is a very large neon sign that reads “If you love me, let me know.”

That’s where people are expected to take selfies, standing beneath the sign.

There’s no lobby to speak of and no front desk.

Most of the first floor is taken up by a very large bar — Bar Moxy — which serves three meals a day including grab-and-go breakfasts, lunch, and a late-night menu.

Guests get their room assignment and digital key at what Billing described as a “boozy check-in tricycle,” that resembles an old-fashion three-wheeled ice cream cart.

The boozy part is the “Got Moxy” nitro cocktail guests get at check-in — a mix of dragon berry rum, fresh lime, black cherry puree garnished with a lime wheel.

A wooden staircase to the rear of the first floor leads to a mezzanine library, which does have a few books in tall blonde-wood bookcases.

To the rear of the mezzanine is a coworking area and off to the side is a conference room.

As Billing described it, “Moxy is designed for the spirited, fun-hunting traveler.”

“Moxy San Diego will aim to push the envelope and bring bold yet playful elements to guests through the hotel’s offerings, unique amenities, and daily and weekly programming,” Billing said.

Those amenities include a game room dubbed “the Now” with pinball, classic arcade games, shuffleboard and life-size Jenga game.

All guest rooms have 55-inch flat-screen televisions, built-in USB ports and free Wi-Fi with one wireless access point per room.

Marriott won’t say how much it spent to build the Moxy San Diego, one of three new downtown hotels that came online in 2018.

The others are Towneplace Suites San Diego Downtown at 1445 Sixth Ave., with 98 rooms, and the InterContinental Hotel San Diego at 900 Bayfront Court with 400 rooms.

More are coming, with two slated to open downtown in 2019 and five expected to open in 2020.

Robert Rauch, CEO of RAR Hospitality, said San Diego should have little difficulty making room for the Moxy and the other new downtown hotels.

“San Diego is really adding about 10 percent supply and that will be absorbed with demand growth averaging 2 percent a year,” Rauch said.

“There’s plenty of room,” Winston said. “I don’t think there’s a major danger ahead for San Diego hoteliers, just some minor pain if the convention center doesn’t get expanded.”

Moxy isn’t the only downtown hotel catering to millennials, if the brashest.

The Pendry, which opened in 2017 at 550 J St., is also in the millennial market, but Rauch and Winston said the Pendry is more of a luxury product than Moxy.

Where the Moxy is edgy, “I think the Pendry is all about luxury and perceives itself as a luxury brand,” Winston said.

Rauch said the Moxy is right on target with its party-themed marketing.

“There’s a market for this kind of hotel in every major market in the U.S.,” Rauch said. “The millennials love it and they’re, if not the largest today, they will be the largest producer of hotel revenues by next year. They’ve overtaken the baby boomers from what I can tell.”

Still, Rauch said that doesn’t mean more conventional hotels are on the outs.

“There is still enormous demand for consistency and quality that the upper mid-scale hotels have provided for years and years,” Rauch said. “There will be demand for what is currently the Marriott Courtyards for a long time, but there is demand for the Moxy.”

Winston is more skeptical about the Moxy’s appeal.

“The hotel companies are exploring every possible niche. The strategy is to see if there is enough demand for a cool hotel,” Winston said. “There’s a little bit of risk involved in doing something that’s highly appealing to one demographic and not the other.”

“I saw evidence in New York that this might work,” Winston said. “I was with a couple of 20-somethings and they’re, ‘this is cool.’”