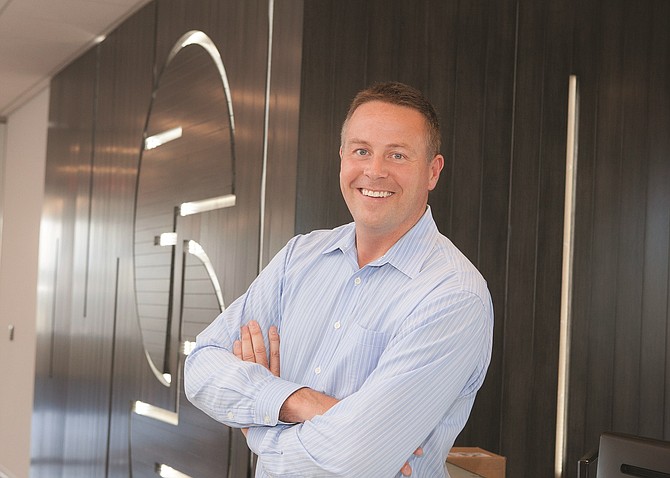 Doug Winter, CEO of Seismic Software Inc., is managing the wave of growth at the company. Success brings its own set of difficulties and decisions. Photo by Melissa Jacobs.

San Diego has given way to just a handful of “unicorns,” or startups valued over $1 billion.

The latest of those is local tech darling Seismic, which makes software for sales professionals. The company closed a $100 million series E round on Dec. 13, led by Silicon Valley-based VC Lightspeed Venture Partners.

The additional funding tipped Seismic’s value to $1.05 billion — making it a unicorn. Though Seismic’s CEO and founder, Doug Winter, doesn’t assign much value to the mythical term.

With the additional cash, Winter has a bigger goal for the company.

“Hopefully this will be the last round we need to do before we think about potentially going public,” Winter said.

Over the last few months, Seismic has taken several big steps toward an IPO.

In late November, Seismic hired its first chief financial officer, John McCauley. He helped lead ServiceNow through its $241 million IPO as its senior director of finance.

Seismic’s most recent funding round through Lightspeed Venture Partners brought another notable executive to its leadership. John Thompson, former CEO of Symantec Corp., will join the company’s board. Thompson helped Symantec — the developer of Norton AntiVirus — grow its revenue tenfold, from $600 million to $6 billion.

Winter said bringing Thompson onto the company’s board was a significant part of Seismic’s decision to take Lightspeed’s investment.

“That was a big piece of it to be honest — people who can help me, provide coaching and mentorship, and have experience with the things that I might not have experience with,” Winter said. “We don’t have an investor who’s been a CEO before. … I’m very excited.”

Aside from the notable additions, Winter said there are several smaller tasks for Seismic to address on its path toward going public, such as updating the company’s financial processes and fine-tuning its products.

“There are lots of little things to do to make sure we’re ready,” he said. “We need to continue doing what we’re doing, keep up the growth rate and capture as much of the market as we can.”

Of course, there are some elements of an IPO that are out of Seismic’s control, such as a volatile stock market. Winter said he’s currently focusing on what his team can prepare, and then deciding whether to make the leap.

“When everything on our side of the street is neat and clean, if it’s the right time, great,” he said. “If not, we will keep on doing what we’re doing.”

In the meantime, Winter plans to continue pushing for the company to continue its rapid pace of growth, investing in product development, overseas expansions, and sales and marketing teams.

Seismic more than doubled its revenue in the first half of 2018. After acquiring rival Savo Group in May, the company was on target for $100 million in revenue by the end of 2018.

Whether or not Seismic chooses to go public, the company has become a mainstay in San Diego’s growing software scene. Several startups in the space are looking to the company to pave the way for more tech talent.