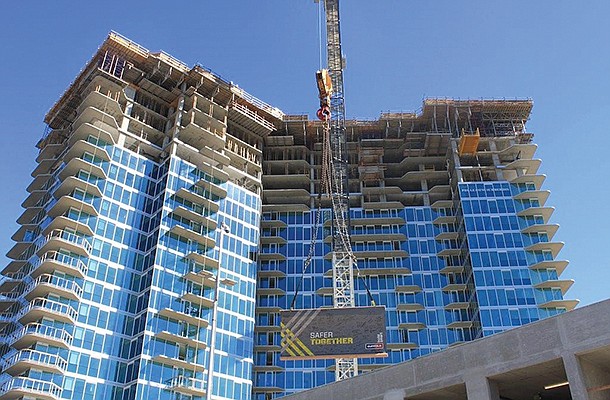 Construction of the Palisade apartment tower is progressing with apartments available for leasing in March or April. Photo courtesy of Suffolk

Looming above University City at the edge of the Westfield UTC mall, the 23-story UTC Residential Tower passed a construction milestone in November with the topping off of the building.

The $123 million project also got a name — Palisade at Westfield UTC.

With 300 apartments, it should be available for leasing by March or April and ready for people to start moving in by summer, said Steven Tetens, project executive for Suffolk, the general contractor on the project.

“What makes this building so unique, it’s different from downtown because you really have a lot of what you’d get downtown, but you’re not downtown,” Tetens said.

Architect Joseph Wong, in describing the design of the tower, said the building is meant to reflect “the easy style of the Southern California coast and the incomparable climate of our region.”

“The materials and colors reflect the sky and clouds,” Wong said.

With the mall that just underwent a $600 million renovation and expansion just a few steps away from the front entrance, Palisade has many of the amenities of an urban center with fewer hassles, Tetens said.

There’s no word yet on how much it will cost to rent an apartment, but judging by the description of what’s inside them, these won’t be for those on a tight budget.

“The amenities available at Westfield UTC’s residential tower will be quite unlike anything else in the local community,” said Nicholas Rumanes, senior vice president of development for Uniball-Rodamco-Westfield, the project developer.

All the units have what Tetens said are “sleek interiors with flush cabinets, European inspired bathrooms,” full built-in refrigerators in the kitchens, kitchen countertops of water-flow quartz, wood floors, and floor-to-ceiling windows.

Bathrooms include mirrors lit from behind to give off a soft glow and vanities with lights at the bottom that are activated automatically when someone enters.

“If you walk in at night, a motion sensor would turn the light on for you. You don’t have to turn on the light,” Tetens said.

Every apartment also has a roomy balcony and “smart-home” features such as thermostats that allow residents to set the room temperature remotely using their smartphones.

The tower also has a 4,300 square-foot indoor/outdoor rooftop sky lounge, a karaoke room, indoor/outdoor yoga and spin studios, locker rooms and steam rooms, an outdoor kitchen and bar with fireplaces, a sports lounge, a library, a private rooftop dining room, a coworking café for residents, three conference rooms, and what Tetens described as “a Las Vegas-style” swimming pool.

There’s also a “bike kitchen” where cyclists can make adjustments on their bikes before setting out for a ride, or make repairs.

Palisade also will have a concierge on duty 24 hours a day, Tetens said.

Like most new apartment complexes, Palisade comes with its own dog park, but this one is 1,500 square feet at grade level with an 180 square-foot pet bathing area and a doggie drinking fountain.

“This is actually an outside, fenced area so it’s like a real dog park,” Tetens said.

While many of the downtown apartment towers seem to be targeting so-called millennials in their 20s and 30s, Tetens said he expects Palisade to attract a fairly eclectic crowd.

“All the interested parties so far have not been millennials,” Tetens said.

Many live in the neighborhood and have watched as Palisade is going up.

Because it’s built on a raised podium on a hill, Tetens said Palisade has views of the Pacific Ocean to the west, the mountains to the east and downtown San Diego to the south.

“You start to get a nice view on the third floor and they only get better as you go up the building,” Tetens said. “My personal preference is the view of the mountains. Those views are stunning.”