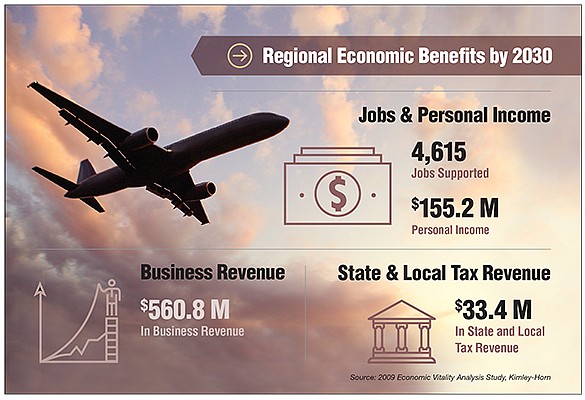 The county of San Diego has approved a new master plan for McClellan-Palomar Airport in Carlsbad which calls for new safety measures as well as extending the runway’s length by up to 800 feet.

The San Diego County Board of Supervisors approved the 20-year master plan in October, after four years of work on the document.

McClellan-Palomar is the second-busiest of the eight airports owned and operated by the county, and had 164,000 takeoffs and landings in 2017. The airport serves corporate jets, privately owned airplanes, and offers commercial flights to San Jose, Reno, Las Vegas and Phoenix on California Pacific Airlines.

Under the master plan, the runway could be lengthened in phases over the next 20 years, allowing large corporate aircraft — which already use the airport — to carry more passengers and more fuel, so they can fly greater distances, said Roger Griffiths, director of airports for the county.

“They (the aircraft) can’t perform to their fullest ability because of the length of the runway,” Griffiths said.

None of the changes envisioned in the master plan would allow for larger airplanes than those currently using McClellan-Palomar, said Griffiths. “It’s still going to remain a corporate and niche market airport.”

A major concern expressed by the public during the creation of the master plan, he said, is that if the runway is lengthened, that would open the door to larger, noisier jets. Griffiths said that is not the intent of the master plan, noting that ground facilities at the airport could not service larger planes, even if they were able to land.

He also said most noise complaints received by the airport are triggered by single engine planes that circle the airport and make multiple approaches for training purposes, rather than by corporate jets that fly straight in and out of the airport.

Other key elements of the master plan include moving the runway 123 feet to the north, which would allow for greater separation of the runway and taxiway, and construction of an engineered materials arresting system, or EMAS, at each end of the runway.

An EMAS system consists of an area of specially made concrete blocks that would give way beneath the weight of an airplane, which would stop a jet that overshoots the runway, said Griffiths, who likened the system to a runaway truck ramp. Initially, the system would be built at the west end of the runway, since most flights land at McClellan-Palomar from east to west, but eventually it would be installed at both ends of the runway.

Griffiths said the total cost of the projects in the master plan is between $100 million to $125 million, with a majority of the funds coming from Federal Aviation Administration grants, and the rest coming from the airport’s enterprise fund.

Initial phases of the master plan, which would include the EMAS system and a short runway extension, could take place within the next seven to 10 years, said Griffiths.

“I think there’s a perception that now that (the master plan) has passed, construction will start next week. That’s not the case,” he said. “These projects are large and complex and will take many years to come to fruition.”