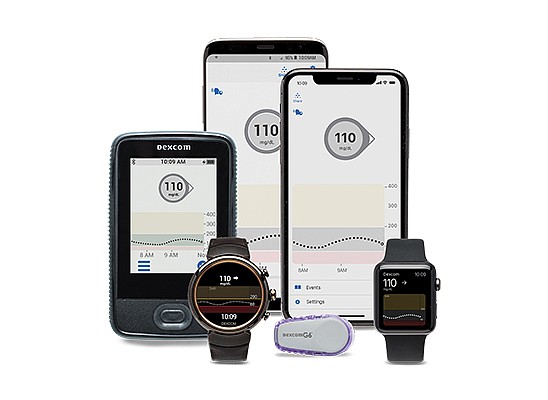 As part of Dexcom’s G6 system, trend lines on smart devices show where glucose levels are heading. The company is working on next-generation glucose monitoring with Verily. Photo courtesy of Dexcom

San Diego’s Dexcom will pay $250 million in stock to Verily — a subsidiary of Google parent company Alphabet — as part of an amended deal. One analyst called the revision a financial and strategic win for Dexcom.

The companies partnered on developing next-generation glucose monitoring technology due out in roughly two years.

“Our collaboration remains on track to deliver our next generation CGM platform by the end of 2020,” Dexcom CEO Kevin Sayer said in a statement. “This updated agreement aligns Dexcom’s and Verily’s mutual interests in bringing Dexcom CGM technology to a broader diabetes population.”

The $250 million in stock is an upfront payment, with an additional $280 million possible, dependent on product launch and revenue milestones. Dexcom may make up to $275 million of these milestone payments in shares of its common stock.

“The milestones now are not tied to overall Dexcom revenues but only Verily-oriented products, which align both companies’ goals to drive adoption within the Type 2 population,” Margaret Kaczor, an equity research analyst with William Blair, said in a research note.

In exchange for these payments, the updated agreement nixed a provision in the original 2015 deal in which Dexcom would have paid royalties.

Other benefits in Kazcor’s view: added flexibility in Type 2 commercial strategies, as well as greater control over Dexcom’s next product launch.

“We believe the announcement is a positive, both financially and strategically, as it essentially gives DexCom complete control over the product line for relatively minimal near-term dilution,” Kaczor said.

Verily CEO Andrew Conrad said as evidenced by the company’s new equity position in Dexcom, “We continue to believe CGM (continuous glucose monitoring) will have a significant impact on management of Type 2 diabetes and Dexcom is poised to lead the way.”