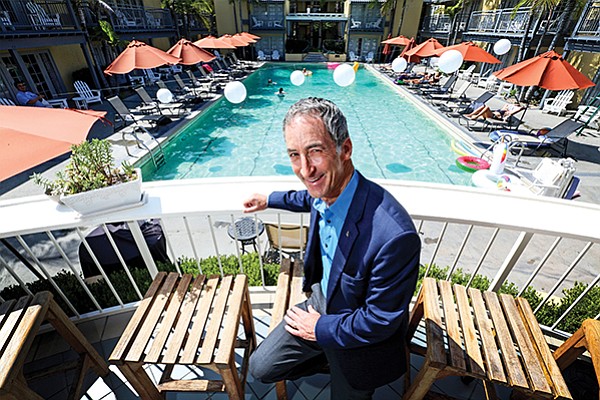 Robert Rauch, founder of RAR Hospitality, says he spends 50 percent of his work time visiting hotels he owns and/or manages, including the Lafayette Hotel in North Park. Photo by Jamie Scott Lytle.

San Diego — Six years ago, while having dinner at one of the 18 hotels he either owns and/or manages, Robert Rauch, founder and CEO of RAR Hospitality, saved the life of one of his guests. 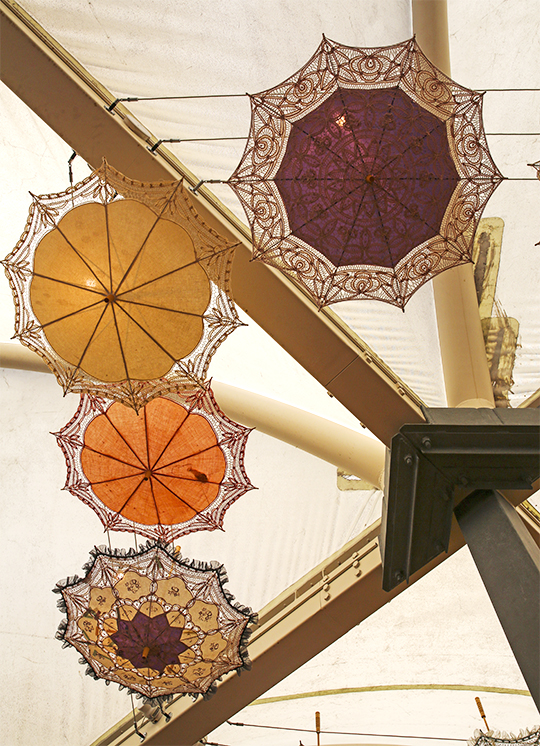 The conservatory room at the Lafayette Hotel in North Park, one of 11 third-party hotels RAR Hospitality manages, has a ceiling covered in different colored open umbrellas.

“It was pure coincidence that I happened to be there having dinner, and a guest was drowning,” recalled Rauch, who founded the hotel management company in 1990. “Someone yelled for help, I called 911, I gave the 16-year-old mouth-to-mouth while his mother looked on, and I resuscitated the boy.” Earlier this year, that grateful young man got married at the same hotel — Homewood Suites in Del Mar.

That wasn’t the first or the last time that Rauch was involved in a crisis management situation at one of his properties, seven of which he owns and manages — four of those being in San Diego County — and 11 third-party hotels that RAR manages in the county and Arizona. Part of his approach to running a successful business is taking care of his employees and together, taking care of the guests. In order to effectively do this, Rauch visits one to three hotels a day a couple of times a week.

Checking In With the Guests

“I spend about 50 percent of my work time at our hotels. I may show up at any time, especially during the busy peaks, and talk to our guests, to see firsthand if they are feeling the love,” said Rauch. “I tell my employees one thing: ‘You only have one job, and that is to take care of the guests.’ If they do that, the guests come back, they spend money at our hotels or our clients’ hotels, and everyone does well. If your employees don’t have the right work ethic and attitude, guests will notice it and won’t come back. It is not easy, but it is very simple.”

Thanks to this hands-on methodology, RAR Hospitality, headquartered in Rancho Bernardo, has seen a 127.6 percent revenue growth from more than $35 million in 2015 to $81 million in 2017. Rauch believes the company will continue to grow at a 33 percent rate per year for the next few years. RAR currently has 12 employees at the corporate level and 700 employees divided up among the 18 hotels that include smaller boutiques to bigger chain types.

Cameron Lamming, president and chief operating officer of RAR Hospitality, says the company’s accomplishments are also a result of its close relationships with its clients, which goes beyond management in some cases.

“We create great partnerships with the people we work with because we play any role,” said Lamming, who has been with the company for three years. “We don’t just say, ‘this is what we do and that’s it.’ If our clients need a loan, we help them get a loan. If they need to host a dinner party, we give them access to our hotels for that. We are there to create long-lasting relationships, not just to get clients and contracts.”

According to Carl Winston, director of the School of Hospitality & Tourism Management at San Diego State University, while RAR Hospitality isn’t a unique business model in that they manage and/or own hotels, Rauch is a visionary in his own right.

“There are multiple owner/management companies in town, including Pinnacle Hotels, Pacifica Hotels and Azul Hospitality Group, but Rauch has done a great job with RAR,” said Winston. “One of the challenges in business is how do you transfer the entrepreneurial vision to a mature organization. But when he brought Cameron and Vikram (Sood, senior vice president of operations), he made very important hires because if you don’t bring the right talent in to execute the vision, then you would fail. He brought the right people in to help with the day-to-day in a way that few entrepreneurs are capable of.”

Rauch got his start as a consultant for the professional services company Deloitte, and, after trying his hand at his own consulting firm, decided to buy his first hotel in 2005. That’s when he realized his strength was in management, which led him to put a team together and begin managing multiple hotels at a time. In 2010, he began managing third-party hotels, with El Cordova Hotel in Coronado being the first, which he still oversees. That’s when the company morphed to RAR Hospitality, as it continued to add properties like the Keating Hotel and the Ramada St. James Hotel, both in Gaslamp, and Carlsbad by the Sea Resort, to list a few. “We recently acquired the Dolphin Motel in Point Loma and we are converting that into a new Hilton property that will be called Monsaraz,” said Rauch.

RAR Hospitality stays ahead of the curve by being thought-leaders and innovators in the hotel and hotel management industry, said Rauch. Just last year, the company added a service robot to its Fairfield Inn & Suites Hotel in San Marcos, the first of its kind in the region. “We were also the first ones in the United States to build a Hilton Garden Inn and Homewood Suites by Hilton together, right next to each other, back in 2003,” he said. “Now, there are a bunch that have followed suit.”

Rauch already has his next project queued up: the first Tapestry Hilton to be built in San Diego, which the company will begin working on soon.