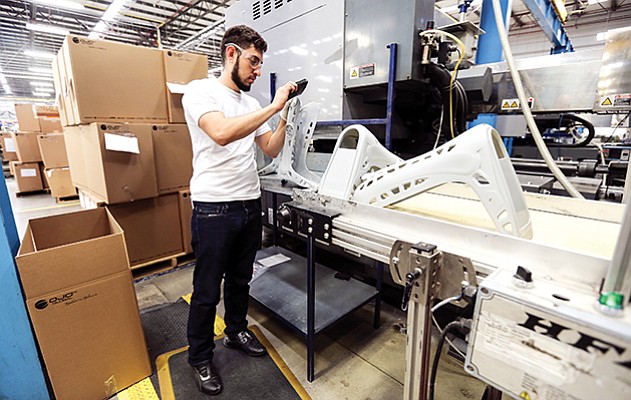 DJO Global’s Efrain Trujillo works on a walking boot at the Mexico plant in Tijuana, which will stay open. File photo by Jamie Scott Lytle

San Diego — DJO Global, which grew from a garage startup to become one of North County’s largest private employers, is laying off 187 local employees and relocating its headquarters to Dallas, Texas.

A major force in the orthopedic bracing industry with 2017 sales of $1.19 billion, DJO Global will keep 300 workers in North County. The company is based in Vista.

“DJO is relocating a number of its corporate employees to a more centralized location to drive growth, accelerate the business, and improve the employee and customer experience,” the company said in a statement, citing as well employees paying less in taxes and for housing.

Kevin Ham, director of economic development for Vista, said he was told Texas’ business environment wasn’t the overriding reason for moving. The company wants to consolidate national operations there, also a central spot for doctors and consultants giving the company’s products a spin.

“The corporate headquarters on the West Coast really made it difficult for physicians to make it from the East Coast,” said Ham, noting the city and company have been in close conversation over the years.

Had Considered Moving Before

Previously, DJO had twice considered relocating, according to Ham. To help fend off the first attempt, the city in 2004 assisted with setting up a manufacturing plant in Tijuana to lower costs. Additional incentives later included training funds.

In a June interview with the San Diego Business Journal, CEO Brady Shirley gave no indication the company was exploring a move, citing DJO’s proximity to Tijuana as an advantage.

No changes are on tap for the Tijuana facility, which produces braces, surgical implants and neuromuscular stimulation products.

The remaining 300 North County employees, part of corporate, bracing and supports, consumer business and manufacturing divisions, will work out of Carlsbad and Vista offices.

The company’s main Vista building will be leased out, which Ham expects to be snapped up quick on account of the area’s low commercial vacancy rate.

“We’re sad to see them move the company headquarters to Dallas, but also understand the reasons it makes sense for them from a corporate standpoint, and we’re glad that they’re still keeping 300 people,” Ham said.

DJO began in a Carlsbad garage in 1978, founded as DonJoy by Mark Nordquist, then a Philadelphia Eagles offensive line captain, and lawyer Ken Reed.

In March, DJO launched X4, a knee brace that through sensors tracks patient recovery following knee replacement surgery. The cloud-connected product, complete with an app, sends patient data to a physician for review.

In 2007, equity firm Blackstone bought DJO Global, which is privately held but reports financials due to public debt.

But the buyout, along with the acquisition of an underperforming brand, Dr. Comfort, in 2011, left the company highly leveraged. A turnaround plan launched in 2016 centered on slashing costs to reinvest in company growth engines.

“We simply shifted resources so we could start feeding the company and giving it the opportunity to have the next 10- to 20-year run, versus just taking some short-term approach that cuts a few costs out, and then two years later you’re trying to determine the next costs you’re going to cut,” Shirley said in June.

A key DJO metric being watched by analysts: earnings before interest, taxes, depreciation and amortization, or EBITDA, which hit $75.6 million in second quarter results, a 19 percent year-over-year increase.

The company will relocate and lay off employees in phases, starting October and ending in June, according to an Aug. 1 letter to the California Employment Development Department. The state’s Worker Adjustment and Retraining Notification (WARN) laws require a 60-day advance notice of layoffs.

“It’s always a challenge when you lose a large employer in your town,” said Vista Chamber of Commerce CEO Bret Schanzenbach.