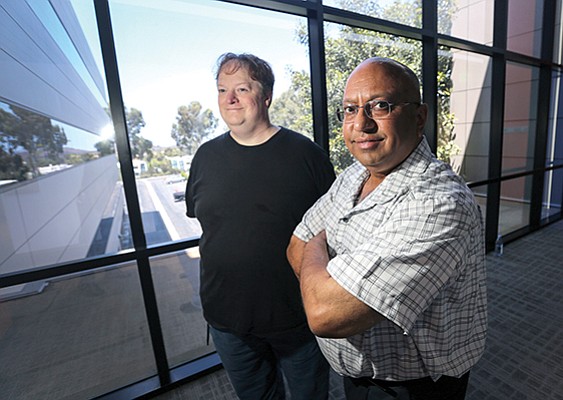 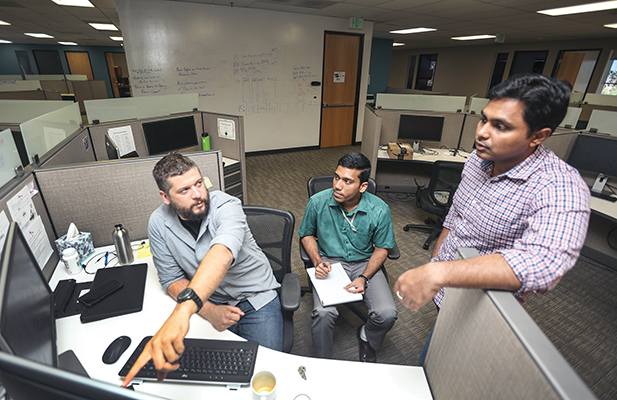 About 40 employees work out of Applied Data Finance headquarters in San Diego. The company, started in 2014, makes loans through its online lending platform, Personify Financial.

Established in 2014, Applied Data Finance (ADF) is the latest in a series of businesses Krishna Gopinathan, CEO and co-founder, has built on a foundation of algorithms.

Like many in San Diego’s analytics community, Gopinathan got his start at HNC Software. There, Gopinathan was on the team that developed Falcon, the predictive software designed to detect credit card fraud. The company, co-founded by UC San Diego scientist Robert Hecht-Nielsen, was later sold to Fair Isaac, known for its FICO credit scores; the Falcon platform remains in use today.

Gopinathan left HNC in 1999 and started Burning Glass Technologies, a company that uses predictive modeling to streamline hiring and other HR issues. Then he moved into the business in which he remains today: lending. He started a company called Global Analytics, a nonbank lender based in San Diego that operated primarily in the United Kingdom. Later he started Lending Stream, which offered six-month installment loans to U.K.-based borrowers.

It was those experiences that led Gopinathan to start ADF to lend to borrowers in the U.S. that typically steer clear of traditional credit sources, he said.

Data Packets in All Directions

Since inception the company has originated more than $100 million in loans for about 25,000 people; it’s licensed to lend in 25 states. The company employs about 200 people, including 40 in San Diego and others in offices in New York, India, and a call center in Jamaica.

Since it launched, ADF has raised about $275 million in equity and debt.

To decide to whom to loan, Gopinathan said the company looks at data from more than 100 sources. Interest rates typically range from 60 percent to 99 percent.

“In this day and age, people are walking through life emitting data packets in all directions,” he said. “The more of those packets we can capture and bring to bear in real time, the more powerful our opportunity will be to serve the underserved customer.”

Broud Kuhn, ADF’s chief marketing officer, said the company views itself as the successor to brick-and-mortar lenders that served borrowers that weren’t considered prime until consolidation reduced those business’s ranks in the 1990s and 2000s. Megabanks snapped up the lenders, then jettisoned them as the recession forced drastic cuts.

A Vacuum Was Created

That left a chunk of Americans that, in a crisis, have nowhere to turn for funds but high-interest payday lenders.

That opportunity was compounded by the advent of the digital age, which has increased borrowers’ comfort level with conducting financial transactions entirely online. It’s also set expectations among consumers that such transactions will be done in a timely manner.

ADF, which offers loans of up to three years via its online lending platform, called Personify Financial, says its installment loans are better for borrowers because its rates are lower than payday lenders. Soon, Kuhn said, borrowers who pay back their first loan with the company will be offered a lower rate on any future advance. A new borrower can have funds in their account as soon as the next day, he added.

Of course, ADF is far from the only player looking to use advanced analytics in a bid to own the subprime lending sector.

Venture-backed firm Elevate Credit went public about a year ago, after pulling its initial public offering the year prior. Its IPO price, when it did debut, was roughly half the previously expected range.

But the stock has risen since, reaching more than $10 per share in July after entering at $7.40. This year the company has said it anticipates revenue of as much as $810 million.

Still, subprime lending is viewed with suspicion by many in the financial system following the recession, in which such loans played a starring role.

“I think if you entered it without the credibility that Krishna and his team have, it’s dangerous territory, but if you have the right team, the right process and the right people, then I think it can work for everybody really well,” said Rick Buoncore, managing partner of MAI Capital Management, which led the recent equity investment round in ADF. “What sets them apart is the quality of the team Krishna has put together, and the quality of the team, the depth of the team and the fact that they’ve been together as a team for a long time.”

Half of the company’s 10-person management team previously worked alongside Gopinathan at Global Analytics.

Victory Park and Park Cities, which lend to lenders as their primary business, are both lenders to ADF and investors in the company.

“The fact that they actually participated in an equity basis as well, I think speaks to the level of confidence they have in our management team and our business,” Kuhn said.