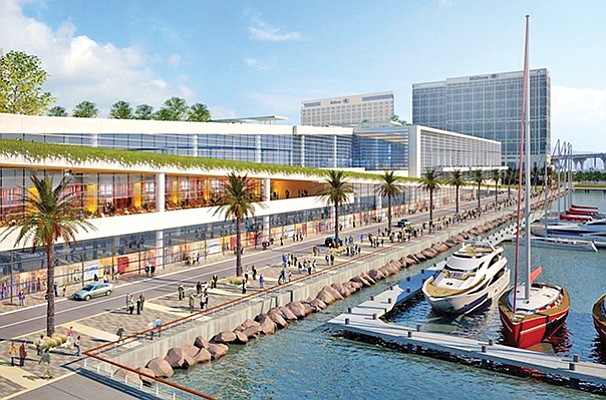 Rendering shows what an expanded downtown convention center would look like. Rendering courtesy of Port of San Diego

San Diego — Getting big projects done in the San Diego region is often a nearly impossible task, with the downtown San Diego Convention Center the latest to run into trouble. 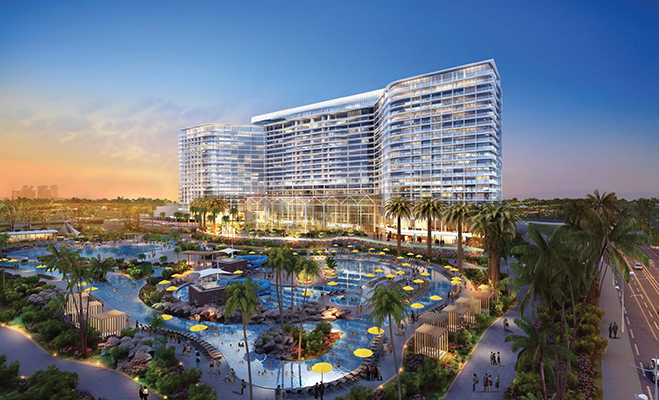 Above, rendering shows what a Chula Vista bay front hotel and convention center might look like. Rendering courtesy of Port of San Diego

“Somehow, we can’t engage ourselves in the bold decision-making that we see in other cities,” said Gary London, a commercial real estate economist.

“That has historically and continues to be a big issue in this community,” said London, senior principal of London Moeder Advisors. “This is the most timid political environment I’ve ever seen in my 60 years in San Diego.”

The possible failure to get enough voter signatures to put the $685 million convention center expansion on the November ballot is “illustrative of how San Diego does large projects,” said political consultant Chris Crotty.

“They just can’t get it together,” Crotty said.

In a 2017 study, HVS Convention, Sports & Entertainment Facilities Consulting, said an expanded convention center would allow the city to attract about 50 more events and increase hotel room revenue by about $123 million annually.

Also in question is a $1.1 billion resort hotel and convention on Chula Vista’s bay front that has the San Diego County Regional Airport Authority joining a lawsuit filed in June by two car rental companies.

“We don’t work together, we fight,” Crotty said. “This should have been something where everybody sat down together and said, ‘OK, how do we make this thing work.”

The Chula Vista development has been talked about for more than 25 years, had several false starts, and finally appeared to be a reality in April with the signing of a development agreement by the Chula Vista City Council, the Port of San Diego and RIDA Chula Vista LLC — the company that would develop a 1,600-room hotel and 275,000 square-foot convention center on a 36-acre site along the bay front.

Officials estimate the project would generate $1.3 billion for the region’s economy during construction and create more than 2,300 jobs with a long-term annual economic impact of $475 million and create 4,470 permanent jobs.

The lawsuit filed by Hertz Corp. and Enterprise Rent-A-Car and joined by the Airport Authority challenges a $3.50 car rental fee imposed by the Port of San Diego that would go toward a parking garage that is part of the Chula Vista project.

On top of that challenge, redevelopment of the former Qualcomm Stadium site in Mission Valley is very much unsettled.

Going to the Voters

Rather than city leaders reaching some sort of consensus on what to do, the matter has been tossed to voters with two competing proposals on the November ballot.

“Many voters are likely perplexed by the competing claims of the two initiatives, suggesting that perhaps neither of them might pass,” said Lynn Reaser, chief economist at the Fermanian Business & Economic Institute at Point Loma Nazarene University.

“The city decided it would not make the decision, so it fell to these two different competing recommendations or projects,” Reaser said. “We could lose both to general confusion.”

If neither Mission Valley plan gets more than 50 percent of the vote, then both are dead and it’s back to the San Diego City Council and Mayor Kevin Faulconer to start all over again.

In the convention center case, people may have been reluctant to sign initiative petitions as a result of what Reaser called “initiative fatigue” from the seemingly constant assault of signature gathers handing them petitions to sign outside grocery stores and shopping centers.

“California has somewhat of a unique position in terms of the plethora of initiatives that go on the ballot for a whole range of topics,” Reaser said.

Beyond that, Reaser said people “may also be weary over the prolonged call and failure to expand the convention center” and don’t see what they stand to lose if the center isn’t expanded.

“It may be because the topic has stretched on for so many years that they are somewhat skeptical of the benefits, or the damage of not having the convention center,” Reaser said.

Crotty, the political consultant, said San Diego voters as a rule are reluctant to approve big projects that they fear could cost them money, either through tax increases or in some other fashion.

“San Diego is very parsimonious when it comes to funding large projects,” Crotty said. “Just about every time something new or different or large has been floated, one half of the city or the county says, ‘No,’ they don’t want to spend money on that. That’s been the history of San Diego.”

London, the economist, said San Diego leaders rely too much on reaching consensus among competing groups.

“It’s why we’re seeing a flare-up of ballot-box decision making, which is simply a result of our elected policymakers unable as our representatives to make decisions, to make tough decisions. Some of it is a lack of vision, but a lot of it is an inability on the part of policymakers to make decisions that they deem to be hazardous to their (political) health,” London said. “I’m not putting it on this mayor. I like this mayor, but somehow, we can’t engage ourselves in the bold decision-making that we see in other cities.”