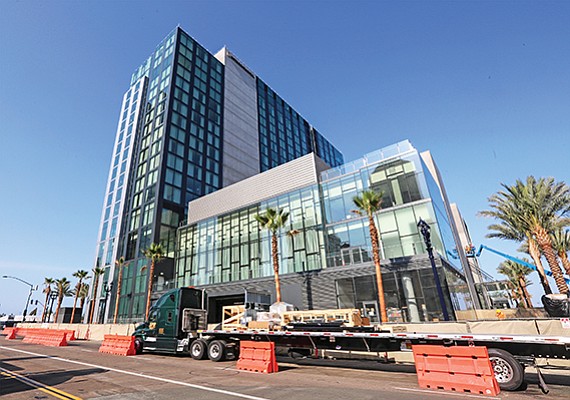 The 400-room InterContinental in downtown San Diego is slated to open late August. It is one of 21 hotels under construction and expected to open between 2018 and 2020 in the county. Photo by Jamie Scott Lytle.

San Diego — On paper, San Diego doesn’t look very good as far as the hotel industry is concerned. It only has two Fortune 500 companies (energy company Sempra Energy and chip-maker Qualcomm Inc.), which means not a lot of corporate travel coming in and going out of the city, thus, less business-trip-related hotel bookings. And, with limited overseas flights until recently, there has not been a lot of international travel to account for, either.

But, that isn’t stopping San Diego and its tourism industry stakeholders from taking full advantage of what the county does offer, like great weather, tons of tourist sites and a plethora of corporate spaces, including the San Diego Convention Center. As a result, the demand for hotel rooms continues to rise and supply continues to increase with the construction and opening of new hotels up and down the coast, setting 2018 to be yet another chart-topping year in hotel development for the county.

According to Atlas Hospitality Group, in the first half of 2017, 26 hotels opened in San Diego, and 130 hotels and 18,271 new hotel rooms were under construction. During the first half of this year, the number of hotels under construction increased 41 percent from the previous year to 183, and the number of new rooms under construction went up 42 percent to 25,872. So far in 2018, San Diego has added four hotels with 627 rooms by way of Legoland Castle Hotel (250 rooms), Willows Hotel & Spa at Viejas (159 rooms), Courtyard San Diego El Cajon (120 rooms) and TownePlace Suites (98 rooms), the latter two by Marriott.

On top of what has already opened, there are 21 hotels with 3,410 rooms currently under construction in the county with anticipated open dates between late 2018 and 2020, the largest of which is the 400-room InterContinental in downtown San Diego, slated to open in August. In the first quarter of 2018, San Diego hosted nearly 7.7 million visitors, according to the San Diego Tourism Authority. Consequently, hotel occupancy is expected to reach 77.5 percent in 2018, and 77.2 percent in 2019.

While business travel makes up 10 percent of total annual hotel occupancy in the county, which is about 20 percent to 25 percent less than other cities in California like Los Angeles and San Francisco, San Diego boasts terrific climate, says Joe Terzi, president and CEO of the Tourism Authority, which translates into hotel bookings and occupancies.

“What we do have is a wonderful leisure destination with great weather, and, as a result, we sell 17.3 million room nights a year,” said Terzi. “Twelve or 13 million of those are pure individual leisure travelers, coming to San Diego on vacation and not a business-related trip.”

The second most important set of travelers into San Diego are those that come for group meetings, in large part due to the city’s sheer number of hotels with desirable meeting spaces, says Terzi. “We sell a million room nights thanks to the convention center each year,” he said. “We don’t have a lot of corporate travel and are limited on the international travel front, but, we hit our stride with the leisure and group meetings folks.”

Overall, San Diego hosts more than 35 million visitors each year, with that number expected to increase by 3.5 percent in 2018. David Hall, general manager of the soon-to-open InterContinental San Diego, who has worked in 20 markets across the United States, agrees the climate is what keeps that number steadily growing.

“No one wants to be in Chicago in February, Atlanta is hot and humid in the summer and then there is hurricane season in Florida. San Diego enjoys higher annual occupancy because the climate is temperate — there is not a lot of variation in temperature,” he said. “When the Southeast or Texas or the desert is hot or humid, and the Northeast and Midwest is covered in snow, we are not. Our upper and lower temperatures are within a tight bandwidth, and that gives us more stable occupancy.”

In the first quarter of 2018, overnight visitors saw a 4.1 percent growth from 2017. In 2018, overnight visitors increased by 2.4 percent. According to Terzi, the city and the travel industry are working hard to make sure to hit — or surpass — those numbers. “We are trying to expand our international travel presence by getting more direct services from here and with expanding our international flights area (at the San Diego International Airport) recently,” he said, adding he hopes the city will get more business travelers by attracting more companies to the area.

Betsy Brennan, president and CEO of the Downtown San Diego Partnership, adds that in the last several years San Diego has made strategic partnerships with other countries and various airlines, which have established direct flights from the county’s airport. She also noted the anticipated convention center expansion as another major effort by the city to entice travelers.

“We, as a region, are working collaboratively together to plan for the future, and the convention center expansion is a good example of that,” she said.

And, there is still room for more, said Brennan. “The evidence is in companies wanting to make the investment in hotels. If they didn’t believe there was a market, they wouldn’t build — it’s as simple as that.

“The vacancy rate is low most years, the price per room is quite strong, and, if convention center expansion happens, that should continue to rise.”