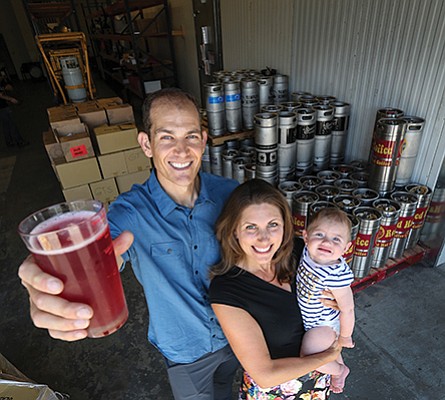 Jared and Deanne Gustafson, shown with their daughter Jade, launched Kombucha On Tap in 2014. Photo by Jamie Scott Lytle.

No. of Local Full-time Employees: 9

San Diego — Deanne Gustafson had been an avid bottled-kombucha drinker for years when, during a 2013 trip to Bend, Oregon, with now-husband Jared Gustafson, she discovered kombucha was also on tap.

“She was out and about and saw kombucha on tap everywhere she went,” said 39-year-old Jared Gustafson about his wife’s sightings, which is what led the two to research the tap kombucha market in San Diego, only to find no one was doing it yet in their hometown.

Jared left his job in production for a cable network six months into the launch, and Deanne was working in online news for AOL when she left to start Kombucha on Tap in 2014 with $10,000 they put together from their personal savings.

Now, four years in, the decision to distribute kombucha via kegs to businesses and homes continues to prove to be a smart one for the couple.

In 2016, a year after the company added coffee to the list and the same year they added juices on tap, Kombucha on Tap saw a 175 percent sales growth and broke the million-dollar mark in sales. In 2017, its revenue was $1.87 million, marking a 71 percent growth from 2016.

Headquartered in Vista, with 15 brands of kombucha, coffee and juices total, 12 employees and with a distribution warehouse in Los Angeles, Kombucha on Tap’s clients include: various Vons’ Pavilions in San Diego, Orange County and Los Angeles, Organic Roots in Temecula, Plant Power Fast Food in Ocean Beach and Encinitas, all Urban Plates locations in southern California, Legoland California and all Union Cowork locations in southern California.

In total, they have over 400 stores they serve through Los Angeles, Orange County and San Diego and cover territory from Thousand Oaks to the U.S.-Mexico border, Riverside and Temecula.

While others have since tried to copy this distribution formula locally, Deanne and Jared Gustafson believe their expertise in the field and focus on customer service is what sets them apart.

“We want to be the best distributor and best partner to our suppliers,” said Jared Gustafson, adding that while they’ve considered making their own kombucha, they just want to be a distributor for now. “We are a niche service provider, which is great. We just think being the middleman is the best way.”

Still, there is room for growth, and the Gustafsons believe they are just scratching the surface of the kombucha scene in SD.

“Starbucks has coffee on tap, 7 Eleven has kombucha on tap, so awareness is starting to grow and so many still haven’t been introduced to it yet,” says Deanne Gustafson. “We are still at the tip of the iceberg.”