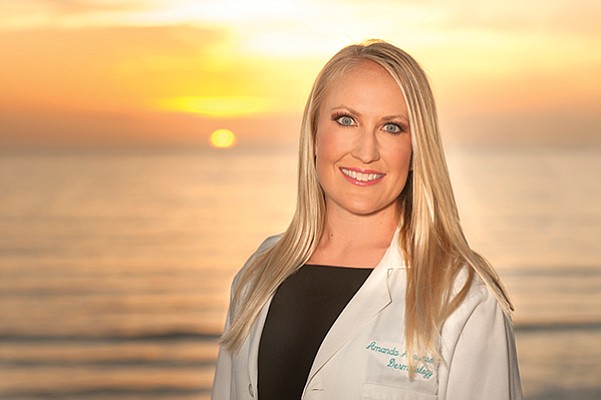 Dr. Amanda Lloyd opted to run her own medical practice, launched in Encinitas in late 2016. Married with a three-month-old child, she juggles work and home duties. “It’s not easy, but you just do it,” she said. Photo courtesy of Amanda Lloyd

San Diego — While many young doctors have abandoned the goal of having their own medical practices, Amanda Lloyd has elected to pursue the dream.

“I enjoy it,” the dermatologist said. “In a larger group you...don’t have as much diversity of tasks. I enjoy the different aspects of managing a business. There is reward to that, as opposed to being a doctor who sees patients and goes home.”

Lloyd, who is in her 30s, started her solo practice in Encinitas in late 2016. Married with a three-month-old child, she juggles work and home duties. On the job, she is supported by a medical assistant and a front desk concierge.

“It’s all about prioritization and time management,” she said. “It’s not easy, but you just do it.”

Lloyd is bucking a trend. Owning a private practice once was a common dream among medical students. They accepted that the goal would require long hours and less free time. For a variety of reasons, including growing medical student debt and the hassles of seeking medical insurance reimbursements, that dream has faded.

An American Medical Association study released last year showed that 2016 was the first year in which less than half of practicing physicians owned their own practices. That’s about 6 percentage points less than in 2012. The study also found that 61 percent of physicians worked in practices with 10 or fewer physicians in 2012. While 57.8 percent were in such practices in 2016.

In contrast, practices with 50 or more doctors increased their share of physicians from about 12 percent in 2012 to nearly 14 percent in 2016, the study found.

The study showed a clear trend among young doctors to choose medical groups over small practices. Fourteen percent of doctors under age 40 were hospital employees compared with only 4.2 percent of physicians age 55 and older.


Lloyd, who did her residency at Baylor College of Medicine, always wanted to own her own business rather than being part of a group. The idea of working for someone else held no appeal.

“I had considered both options,” she said. “During residency, it was clear I wanted to do private practice. I like the flexibility. You are flexible in how you treat patients. It allows you to make your practice what you want. You are allowed to follow your own agenda, which I really like.”

Lloyd likes making her own choices. As a solo practitioner, Lloyd said she is free to focus on the areas of dermatology that she enjoys most. Unlike doctors who are part of large groups, she can decide how many patients she wants to see in a single day. She doesn’t discount the effort it takes to run a business. However, she believes that having the ability to make her own decisions and set her own hours “is completely worth the few headaches of having my own practice.”

‘Jack of All Trades’

Lloyd says her friends in the medical community are proud of her decision to be a solo practitioner.

“When you are in private practice you are kind of a jack of all trades,” she said. “There are pluses and minuses with every job. You just have to pick the one that fits your personality and your goals. It’s a lot of work. It’s not easy, but it’s OK.”