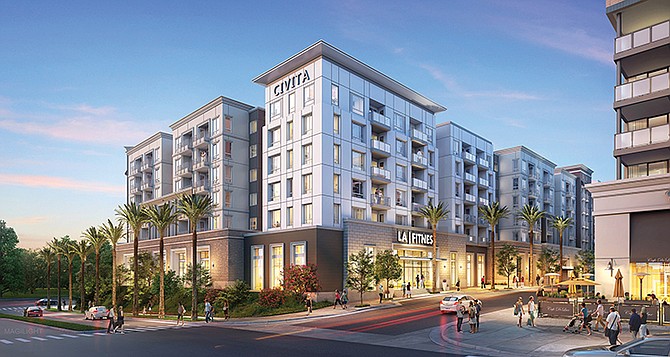 San Diego — Seven years ago, Sudberry Properties said it would take 10 to 15 years to transform a 230-acre former Mission Valley rock quarry into a master-planned community that would set the tone for what the future of San Diego could look like.

“There’s probably another five to 10 years left to go,” said Marco Sessa, the Sudberry senior vice president who is overseeing the $2 billion development of Civita. Originally known as Quarry Falls in deference to its history, Sudberry changed the name of the site to Civita, which the company said was derived from the Latin roots for civic and vitality.

The most recent addition to Civita is a $137.5 million affordable apartment complex — Siena Apartments for seniors over the age of 62 and Stylus Apartments for families — being built by Chelsea Investment Corp.

Chelsea will manage the apartments and Sudberry will manage 37,000-square-feet of ground-floor retail space, which will be leased to LA Fitness.

The Siena/Stylus complex will have its own water reclamation system for irrigation.

Also under construction is the 434-apartment Purl, a two-building luxury market rate project adjacent to Siena and Stylus with 18,000 square feet of ground-floor retail space.

The Purl complex also will have two swimming pools and spas, an outdoor theater and terrace, music lounge and practice studio.

‘Asset for the City’

Shea Homes was the first to build for-sale housing in Civita in 2011 with Origen, an award-winning condominium complex with 200 three-story and four-story loft-style townhomes.

“It’s a real pleasure to see Civita come alive, with so many new residents occupying an excellent balance of housing opportunities. The Civita Park is a real gem and an incredible asset for the city,” said Paul Barnes, president of Shea Homes San Diego.

Shea also built the neighborhood of Frame & Focus, a 140-unit townhome complex built in 2013, and the 59-unit Lucent condominiums.

For-sale projects under construction are Lucent II, a 66-unit project by Shea Homes; The New Home Co.’s Promontory development of 133 three-story and single-level attached homes, and Elevate by ColRich, 62 attached one, two and three story homes.

Market rate apartments completed include the 306-unit Circa and the 612-unit West Park, both built by Sudberry and the 150-unit Versa affordable complex built by Chelsea Investment.

“One of the things we worked quite hard on, particularly on the for sale side, is having variety both in unit size and price points,” Sessa said. “We don’t want them to be building the exact same thing. The goal is really to have a broad appeal to a whole bunch of folks. The community’s large enough that it, frankly, creates a nicer variety when you have a lot of diversity in your resident mix.”

Most of Office, Retail Space to Come

When Civita is finished, it will include about 4,700 homes, condominiums and apartments.

“Right now, we have about 1,600 units finished and occupied,” Sessa said, adding that an additional 1,000 units, including the affordable housing project, are under construction or in design.

“We have another 2,000 units left to go, a mix of townhomes, condominiums and apartments,” Sessa said.

Aside from the retail included in some of the condominium and apartment complexes, most of the up to 480,000 square feet of retail space and up to 420,000 square-feet of office space approved is still to come on the northeast side of Civita.

Plans call for that section to be connected by a pedestrian bridge to the Rio Vista shopping center across Friars Road.

Civita also will include $27.7 million in parkland, including a 14.3 acre central park that opened earlier this year.

Construction of a final stage of the central park will start later this year.