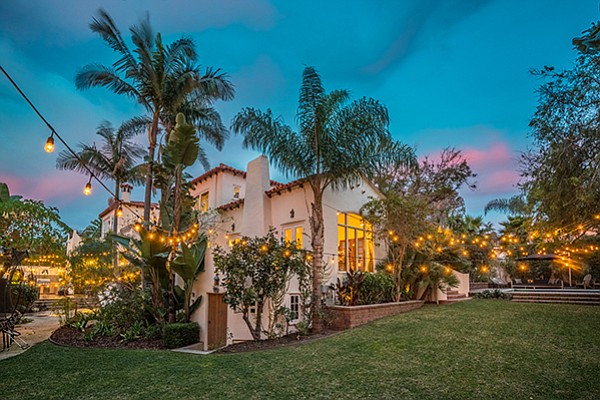 San Diego — For most people, a home is not just a financial asset, but rather it is a place where a family can create a backdrop for cherished memories throughout the generations. The doorjamb marked with pencil lines as the children grow, the trees planted as saplings that eventually grow large enough for a tree house — a place of joy, struggle, triumph, safety and comfort.

This is the soul of the home at 1004 Devonshire Drive in the Sunset Cliffs area of Point Loma. It’s captivating from the moment you open the gate in the white stucco wall and step onto the stone courtyard that leads to the arched wooden front door.

Its historical roots are noted on the official City of San Diego plaque at the gate as the John Steven McGroarty Spec House No. 1, built in 1927 and designated as a Mills Act home in 2013.

Vivianne deFrance Ramirez and Cathy Nakanote, affiliate agents with the San Diego Metro office of Coldwell Banker Residential Brokerage, have the listing on the home that is priced at $3.95 million. It’s approximately 4,606 square feet with five bedrooms, four baths on 0.4 acres.

“Being able to represent this property is an honor for me,” Ramirez said. “Not just because of the property and the area, but because I value historic homes — especially in Point Loma.”

Ramirez is passionate about historic homes and has a special affinity for Point Loma because it was where she lived when she first arrived in San Diego in 2006 from Orange County. Originally from Brazil, she is fluent in English, Spanish and Portuguese and has been in real estate since 2011.

The history of the Devonshire Drive home is an integral part of the development of the Sunset Cliffs area. In the early 1920s, John P. Mills, a successful Los Angeles real estate developer, bought 300 acres on Sunset Cliffs from baseball magnate Albert Goodwill Spalding and began developing it. In 1927, the John P. Mills Organization Inc., in partnership with Pantages, Mills and Shreve Co., set about to sell lots in an area they called the Riviera Villas.

Mills was quoted in a 1975 San Diego Union story by Carol Olten, a La Jolla Historical Society writer as saying: “I hired a special train to bring buyers to San Diego from Los Angeles,” Mills recalled. “Put them under a big tent like at an evangelist meeting, fed them and lectured them about San Diego...it didn’t take long to make a sale.”

It’s important to note that John P. Mills is not the namesake of the Mills Act, familiar to many San Diegans as the historic designation that provides a property tax break. The Mills Act was shepherded through the California state Legislature in 1972 by California State Senator Jim Mills as a measure to preserve historic homes and neighborhoods.

A City of San Diego Historical Resources Board 2012 document noted that the Devonshire home was built in the subdivision on a lot purchased by John Steven McGroarty whose intent was to build spec house for resale. John P. Mills built his home nearby at 1203 Sunset Cliffs Blvd. at a cost of $175,000 in 1925. It still stands today.

The home on Devonshire was meticulously renovated by San Diego architect Lee Hope in 2011 under the strict guidelines of maintaining its historic character to qualify for the Mills Act designation in 2013. According to Hope’s website, he is a native San Diegan and third generation Hope architect.

The renovation involved a complete remodel of the upper and lower levels of the residence while refreshing but keeping the living and dining room authentic to the original.

Each room is a delight — red Spanish-tile stairs with a wrought-iron hand rail lead to the upper level with a girl’s room, boy’s room, laundry, den, dramatic tile shower in the large bathroom and an exquisite master suite with a fireplace. Nearly every room has a view of the ocean.

The kitchen is open to a large family room and light floods in from all sides through arched windows and French doors. Another formal living room is off the dining room.

The large lot has a pool, a tree house (it too with an ocean view) built around an ancient tree. Several rooms have their own private balconies overlooking the ocean and various outdoor entertainment areas. 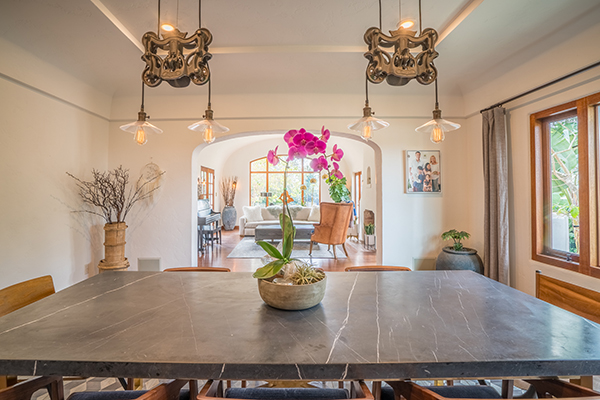 The view of the formal dining room into the formal living room. Photocourtesy of Coldwell Banker Residential Realty

A spectacular tiled fountain featuring two large peacocks in shades of light blue and yellow is the centerpiece of the courtyard that is off a den in the back. Several strings of Edison lights crisscross over the pool and outdoor kitchen area.

The builder of the home, McGroarty, was a poet, Los Angeles Times columnist and author who also served two terms as a California Democratic Congressman from 1935 to 1939.

He wrote a poem about the home he referred to as “The Harbor of the Sun.” An excerpt:

“In the heart of man there are two times of longing — the time of youth that longs for wealth and power, and the time of retrospect when the soul grows wiser. And for these times and all times, the Harbor of the Sun waits with both a solace and a reward.”