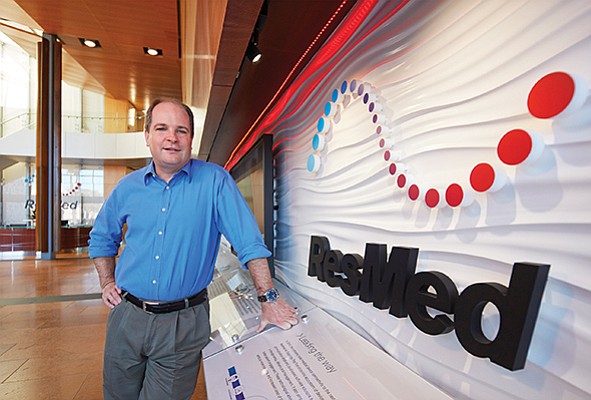 This was on an overnight flight from Hong Kong to Sydney, and the two sat together by happenstance. The Deutsche Bank analyst argued ResMed’s sleep-breathing devices already saturated the market.

Farrell, ResMed’s CEO, responded that its machines had yet to scratch the surface in disorders like sleep apnea, characterized by a gasping snore. To prove it, Farrell said a passenger would emit such a noise before touching down. His prediction came true during takeoff.

The analyst changed his tune. Farrell handed the snorer his business card. In recent years, strong demand and a digital transformation spurred ResMed’s growth. The company posted $2.07 billion in 2017 revenue, up 37.1 percent from 2013, when Farrell took over as CEO. The company’s market cap went from $6 billion to nearly $14 billion in this span.

Founded in 1989, ResMed built an empire on machines that prevent a patient’s airway from collapsing during sleep.

Under Farrell, the company invested heavily in cloud-connected devices and apps, increasing awareness, diagnosis and treatment of sleep problems. An expression he uttered several times during the interview: “software eats the world,” meaning go digital so you’re not in the taxi business when Uber emerges.

When Farrell made his prediction on the plane, the odds were in his favor.

Roughly 50 million to 70 million Americans suffer from sleep or wakefulness disorders, the Centers for Disease Control and Prevention estimates.

This includes sleep apnea, in which breathing stops and starts, causing tiredness during the day and potentially serious issues like heart disease. Most sufferers don’t realize they have it.

It’s why the words “ignorance is our greatest competitor” immediately greet visitors stepping into ResMed’s 300,000-square-foot corporate headquarters. They’re emblazoned atop a cutout of Peter Farrell, founding CEO and chairman, and Mick’s father.

Meanwhile, Mick was a college student studying to become a chemical engineer. Growing up in Sydney, Australia, he gravitated toward physics and chemistry, balanced with a love of music and photography.

In 1998, he obtained master’s degrees in business administration and chemical engineering from the Massachusetts Institute of Technology.

While at MIT, he worked as a process engineer at BHP Billiton, followed by gigs at Genzyme and Arthur D. Little. In 2000, he put experience in biotech, chemicals and management consulting to good use in a new role: ResMed’s director of business development.

“I’d call my father for advice on choosing between two jobs,” Mick said. “He said, ‘If you’re going to interview for one of my competitors, you should interview at ResMed.’

Mick climbed the ranks, becoming president of the Americas division. When it came time to find Peter’s replacement, the board hired executive search firm Spencer Stuart to lead the process, which zeroed in on Mick. The founding CEO recused himself from a final board vote, according to an article at the time in The Australian.

Mick highlighted the part of his resume with life sciences companies that reinvented themselves. He had the same in mind for ResMed.

A few years ago ResMed embedded cellular chips in all its devices, feeding data into the cloud. ResMed’s app myAir, when paired with a ResMed device, lets patients (and their physicians) track and manage sleep therapy.

“The more they can increase patient adherence through some of these programs, the more they can take down operating costs, which ends up being a benefit to the system as a whole,” said Margaret Kaczor, an equity research analyst with William Blair.

In 2016, ResMed doubled down on digital by buying for $800 million Brightree, a cloud-based software provider. The company credits the move with driving growth. So do analysts.

“Brightree continues to innovate and allow for opportunities to increase revenue per customer,” said an April 2 research note from William Blair. “ResMed continues to actively innovate on the Brightree product offering, supporting our view of sustainable mid-teens growth in this business.”

Initially, the acquisition plan drew board scrutiny – and understandably so given the $800 million price tag. ResMed executives pitched it as a “reverse Amazon,” a hardware company embracing software.

“When your management team comes in and says, ‘We’re doing a reverse Amazon: We are going to be a software-driven medical company. And we’re going to change from selling devices to selling solutions and selling software, and we want to invest a large portion of our cash and 10 percent of our value in this area of software.’ You can imagine that the discussion wasn’t, ‘Yeah sure, go for it guys and good luck,’” Farrell said.

“There was a lot of discussion.”

Data puts ResMed on the forefront of another area: sleep apnea reimbursement. France’s government recently tied reimbursement to apnea telemonitoring, and ResMed seeks to convince other payers to follow suit.

“I think you’ll start to see some private payers in the U.S. move on this quickly,” Farrell said.

Reimbursement decisions are based on hard numbers, of which ResMed has plenty. Notably, an American College of Chest Physicians study showed that ResMed’s patient engagement apps and digital monitoring boosted sleep apnea therapy compliance to 87 percent, compared with as low as 50 percent without remote tracking.

ResMed made its name on sleep issues. But a ResMed spinoff, Carlsbad-based SleepScore Labs of Carlsbad, is targeting sleep in general. SleepScore’s consumer electronics device perched on a nightstand measures how a person slept through low-power radio waves, in a joint venture between ResMed, surgeon and television personality Dr. Mehmet Oz, and Pegasus Capital Advisors.

ResMed’s high-tech conversion shows when strolling through the office’s second and third floors, which Farrell calls a “little piece of Silicon Valley.” Think open floorplans, computer wizards typing away and snacks strewn about, a contrast to the high-end art in the

Digital informatics proved a goldmine, but asked about regrets as CEO, Farrell said he struggled to find a work-life balance during the first two years.

He flew around the world on weekends, at the expense of time with his wife and two kids.

Reprioritizing, he said, made him a better CEO.

“Because I am much better Monday morning after I have been to church on Sunday, spent time at my son’s soccer game, watched my daughter play lacrosse ... and spent time on a date night with my wife,” Farrell said.

“I was trying to be the hero CEO, and I lost a little bit of me,” he said.

What’s next? Farrell referenced a ResMed 2025 plan, which will go public in a year or two that places tech at the center.

“Where we’re going is another revolution for the company. The next revolution will be around data analytics, artificial intelligence, machine learning and deep-neural networks,” Farrell said.