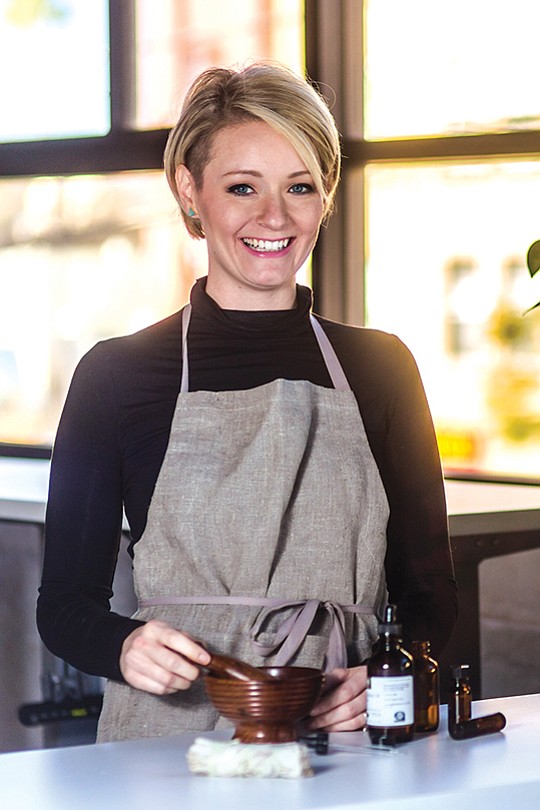 Molly Beane, founder and CEO of From Molly With Love, a Pacific-Beach based skincare company. In March 2017, the business launched its own e-commerce website. Photo courtesy of Molly Beane

San Diego — Molly Beane’s business model might have been seen as a little bit desperate. But just out of rehab, out of work, and almost out of money, she made her move.

Beane, founder and CEO of From Molly With Love, a Pacific-Beach based skincare company reached $180,000 in sales during 2017, the company’s first year of business. Year to date, the enterprise has already reached more than $120,000 in sales, according to the company.

“It’s pretty close to our annual rev enue number in a quarter and the quarter is not even done,” Beane said. “Our top three products are our white sage smudge spray, beauty oil, and probiotic deodorant and we’ve sold tens of thousands of each.”

Her interest for learning how to make skincare products began four years prior to entering rehab for alcoholism in 2016. As a hobby, Beane researched and learned how to make cosmetic formulations and created her first product, the beauty oil, which she said is the company’s best-selling facial oil. She shared her first set of products with friends, who encouraged her to sell them. However, after losing her job while in rehab, Beane had little money to fund a company. 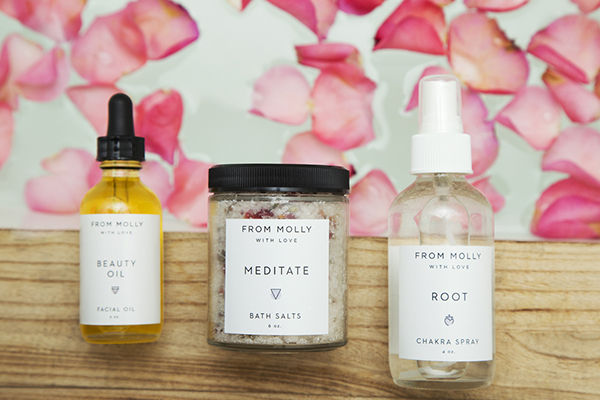 Using the few hundred dollars she had left, Beane purchased raw materials to create the facial oil for From Molly With Love. Although she initially purchased supplies from Amazon and Sprouts, the company now sources from wholesale suppliers. Beane explained the company was small enough in the beginning to wait for an order and then produce it.

The company first started selling its items on Etsy and later through Amazon, one of about 300,000 small and medium sized sellers that joined the platform in 2017. In March 2017, the business launched its own e-commerce website. The products are also featured inside several subscription boxes with companies such as Yogi Surprise and Gaia Collective Moon Box.

From Molly With Love is now working with the boutique-retail store, francesca’s, which bought 14,000 units of various products for $70,000 in March. The company’s products will be in 400 francesca’s stores nationwide by the end of April.

Beane said From Molly With Love’s growth was the result of several factors. She credited her success mainly to the philosophy behind the brand which is “a women’s empowerment company first that just happens to sell products.”

“We have built this loyal, devoted, community for people who are our target girl — she doesn’t want to be pandered to, she doesn’t want to be told that she needs an anti-wrinkle cream, or that she needs to lose weight. A group of women are feeling quite fatigued at all of these messages that are promoting this unrealistic and toxic beauty ideal,” Beane said. “The conversation is about ending beauty shaming — how women can use radical self-care to heal themselves from a lifetime of low self-esteem and just feeling constantly being placed in this box that is unrealistic to fit into.”

Empowerment isn’t the only think drawing customers; Beane touts the cost of her cosmetics.

“Our brand is inclusive and intersectional. It is very justice and feminist orientated, so I wanted our products to be inclusive too so that means they have to be priced at a fair price.” The company’s products range from $8.99 to $46.99.

“(With SeedInvest) I could have my community invest, which speaks to that inclusivity thing that we are so passionate about,” Beane stated.

She, along with her six part-time employees and one full-time employee, make all of the products in Beane’s apartment. The company has an office space at the WeWork building in downtown San Diego, but Beane is seeking to purchase a local, professional facility or small warehouse space dedicated to production. The company currently ships its homemade products from a warehouse in Texas, to keep costs down.

Congcong Zheng, associate professor of management and entrepreneurship at the Fowler College of Business Administration at San Diego State University, suggested some factors of success for businesses that are utilizing their brand narrative as a marketing tool.

“Abide by the law, take care of people who work for them – they are the biggest advocates — and take care of consumers by offering them the best quality products with the best price,” Zheng

Beane believes these products serve as tools for self-care and that self-care can help her customers recover some of their resilience — an experience to which she can relate.